Bill Bryson stepping down as Chancellor 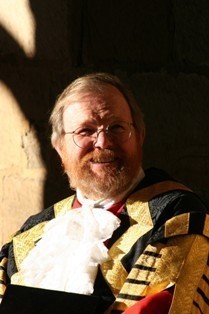 Durham University Chancellor Bill Bryson is to step down from the role by the end of 2011, it was announced today.

Bill, a world famous author, became the University's 11th Chancellor - the formal head of the University - in April 2005 and is leaving to spend more time on his writing and family commitments.

Bill, who is US-born and has lived most of his adult life in England, is best known for his series of books observing life in North America, Britain, Europe and Australia. He sang the praises of the City of Durham in his best-selling book, Notes from a Small Island.

A Chancellor's most public role is in conferring degrees at university ceremonies, but the duties can be as varied as the post-holder wishes and Bill has made an outstanding contribution to life at Durham University.

Professor Chris Higgins, Vice-Chancellor of Durham University, said: "Bill has done far more than simply fulfilling his ceremonial duties at Congregation, giving his time, passion and inimitable talent to raise the University's national and international profile in so many ways.

"Bill has been a wonderful ambassador for Durham, engaging with decision-makers, businesses, the media, University partners, and of course with our staff, students and alumni in departments, colleges and at a whole host of events in Durham and around the world.

"Sadly, Bill has indicated to us that, following careful reflection, he feels he should step down from his role as Chancellor by the end of 2011, after almost seven years in the role, due to his increasing professional and personal commitments.

"As an active writer, and more importantly as a husband, father and grandfather, he is, understandably, keen to spend more time at home."

Bill Bryson said: "I will treasure forever the time that I have spent at Durham University and in this beautiful city. It has been just the greatest privilege and honour I have had in my life to serve as Chancellor for such a remarkable community of students, staff and life-long University friends. I will miss Durham more than I can say and hope to find time to continue to visit after my time as Chancellor has come to an end."

Bill's charitable activities at Durham have included the ‘My friend Oli' campaign to encourage people to sign on to the NHS Organ Donor Register, and he has joined Durham students as a litter-picker whenever he can to help keep Durham clean.

His commitment to engaging with all aspects of Durham life has been a defining part of his Chancellorship. Sam Roseveare, President, Durham Students' Union, said: "Bill Bryson has been an inspiration and a true friend to Durham students. We will miss him greatly when he leaves.

"As a staunch advocate of student volunteering and charity work, Bill has made a genuine and personal impact on the student experience and coupled with the eloquence of his addresses at Congregations, he has been the very archetype of a Chancellor.

"There is a great deal of goodwill felt towards Bill - I was discussing his departure with a group of students and it was as if they had lost, if not a close family member, a close family friend!"

Durham University has now begun the process to nominate, and thereafter appoint, a new Chancellor to succeed Bill. An announcement will be made in due course.

Bill Bryson's last official engagement as Chancellor will be on July 1st 2011 at Summer Congregation.