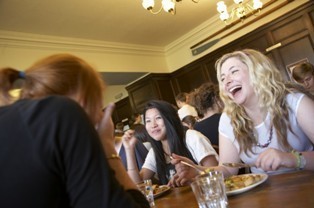 Durham University has further cemented its position among the world's leading universities after a second successive international rankings guide placed Durham firmly in its Top 100.

Following its move into the top 100 in the 2010 QS World University League Rankings, announced on September 9, Durham University was confirmed at number 85 in a new world universities league table produced by Times Higher Education (THE) on Thursday, September 16.

The THE World University Rankings 2010-11 recognised Durham's strengths in research, placing the University in the World's Top 40 for the citations of its research by global academics and ranking our performance and reputation in Arts & Humanities and Social Sciences subject areas in the world's top 50.

The QS rankings placed Durham in the top 25 globally for employer reputation (1) after 5,000 blue-chip organisations across the world ranked the quality and demand for Durham's graduates ahead of leading institutions in the UK and major international universities in Singapore, Hong Kong, Toronto and Sydney, as well as a number of Ivy League institutions in the US, including Princeton.

These international successes rounded-off a landmark year of recognition for the University with systematic rises up all major UK league tables.

Over the last five years, Durham has undertaken sustained work to ensure the quality of its education and research is world-class.  For example, increased spending on student facilities and steps to make Durham graduates even more attractive to employers have further enhanced the University's reputation for providing an outstanding student experience.

Such measures are becoming more widely recognised by the multitude of national and international assessments, despite the fact that they each use different methodologies.

In the Sunday Times guide, which was also announced in September, Durham demonstrated particularly outstanding performance in individual subject league tables securing first-place ranking in education, English, history and archaeology, and languages. It also broke up the Oxbridge monopoly in the field of philosophy, theology and religious studies to take second place and secured further top four placings in economics, geography, law and physical science.

Even outside the traditional academic pursuits, Durham's pedigree in performing arts and sport were seen to contribute to its standing, rivalled only by Oxford and Cambridge, as a broad-subject, multi-disciplinary university which boasts the toughest entry standards and lowest drop-out rates in the country.

Professor Chris Higgins, Durham University Vice-Chancellor, said:  "It is good to be recognised by both national and international league tables as one of the very best universities around and to be leading a high-performing UK Higher Education sector in several subject areas.

"Durham University has long been recognised internationally for its distinctive dual-education delivered by our colleges and departments and our heritage and culture, including our beautiful University estate and World Heritage Site foundations, sets us apart from so many other international universities. Breaking into the top 100 is a good step forward but our strategy is to break into the world's top 50 by 2020.

"To have our graduates ranked in the world's top 25 among employers is a great achievement and sits alongside the recognition of our world-leading research outputs across broad academic disciplines and the achievements of our alumni in putting Durham University firmly on the worldwide map."