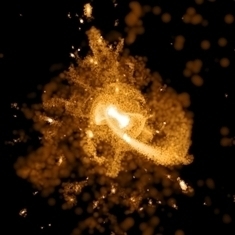 Many of the Milky Way's ancient stars are remnants of smaller galaxies torn apart by galactic collisions around five billion years ago, according to Durham University.

Scientists at Durham's Institute for Computational Cosmology and their collaborators at the Max Planck Institute for Astrophysics, in Germany, and Groningen University, in Holland, ran huge computer simulations to recreate the beginnings of our galaxy.

The simulations revealed that the ancient stars, found in a stellar halo of debris surrounding the Milky Way, had been ripped from smaller galaxies by the gravity generated by colliding galaxies.

Cosmologists predict that the early Universe was full of small galaxies which led short and violent lives. These galaxies collided with each other leaving behind debris which eventually settled into more familiar looking galaxies like the Milky Way.

The researchers say their finding supports the theory that many of the Milky Way's ancient stars had once belonged to other galaxies instead of being the earliest stars born inside the galaxy when it began to form about 10 billion years ago.

The research, funded in the UK by the STFC, appears in the Monthly Notices of the Royal Astronomical Society.

Lead author Andrew Cooper, from Durham University's Institute for Computational Cosmology, said: "Effectively we became galactic archaeologists, hunting out the likely sites where ancient stars could be scattered around the galaxy.

"Our simulations show how different relics in the galaxy today, like these ancient stars, are related to events in the distant past.

"Like ancient rock strata that reveal the history of Earth, the stellar halo preserves a record of a dramatic primeval period in the life of the Milky Way which ended long before the Sun was born."

The computer simulations started from the Big Bang, around 13 billion years ago, and used the universal laws of physics to simulate the evolution of dark matter and the stars.

These simulations are the most realistic to date, capable of zooming into the very fine detail of the stellar halo structure, including star "streams" - which are stars being pulled from the smaller galaxies by the gravity of the dark matter.

One in one hundred stars in the Milky Way belong to the stellar halo, which is much larger than the galaxy's familiar spiral disk. These stars are almost as old as the Universe.

Professor Carlos Frenk, Director of Durham University's Institute for Computational Cosmology, said: "The simulations are a blueprint for galaxy formation.

"They show that vital clues to the early, violent history of the Milky Way lie on our galactic doorstep.

"Our data will help observers decode the trials and tribulations of our galaxy in a similar way to how archaeologists work out how ancient Romans lived from the artefacts they left behind."

The research is part of the Aquarius Project, which uses the largest supercomputer simulations to study the formation of galaxies like the Milky Way.

Durham's cosmologists will present their work to the public as part of the Royal Society's 350th anniversary 'See Further' exhibition, held at London's Southbank Centre until Sunday, July 4.

The highlight of their 'Cosmic Origins' exhibit is an award winning 3-D movie describing how the Milky Way formed. Visitors to the exhibit can also create their own star streams by colliding galaxies with an interactive 3-D simulation.