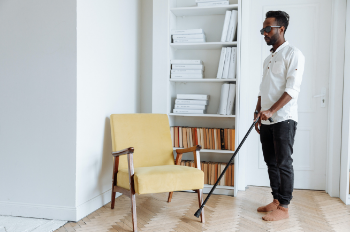 Known as nature’s own sonar system, echolocation occurs when an animal emits a sound that bounces off objects in the environment, returning echoes that provide information about the surrounding space.

While echolocation is well known in whale or bat species, previous research has also indicated that some blind people may use click-based echolocation to judge spaces and improve their navigation skills.

Equipped with this knowledge a team of researchers, led by Dr Lore Thaler, delved into the factors that determine how people learn this skill.

Over the course of a 10-week training programme, the team investigated how blindness and age affect learning of click-based echolocation. They also studied how learning this skill affects the daily lives of people who are blind.

The study involved blind and sighted participants between 21 and 79 years of age who trained over the course of 10 weeks. Blind participants also took part in a 3-month follow up survey assessing the effects of the training on their daily life.

Both sighted and blind people improved considerably on all measures, and in some cases performed comparatively to expert echolocators at the end of training. Somewhat surprisingly, in some cases sighted people even performed better than those who were blind.

Importantly, however, neither age nor blindness was a limiting factor in participants’ rate of learning or in their ability to apply their echolocation skills to novel, untrained tasks.

Furthermore, in the follow up survey, all participants who were blind reported improved mobility, and 83% reported better independence and wellbeing.

Not limited by age or vision

Overall, the results suggest that the ability to learn click-based echolocation is not strongly limited by age or level of vision. This has positive implications for the rehabilitation of people with vision loss or in the early stages of progressive vision loss.

Despite this, the results indicate that blind people who use echolocation and people new to echolocation are confident to use it in social situations, indicating that the perceived stigma is perhaps much smaller than previously thought.

The work was funded by a grant of the Biotechnology and Biological Sciences Research Council United Kingdom, and a grant from the Network for Social Change.