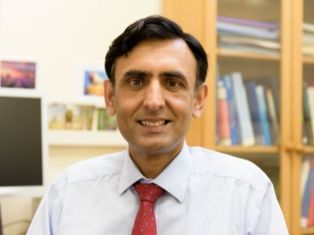 One of our leading researchers is to be honoured by India’s oldest science academy.

Professor Jas Pal Badyal, FRS has been elected as a Foreign Fellow of the National Academy of Sciences, India (NASI).

NASI was the first scientific academy in India and promotes scientific and technological research related to the problems of societal welfare.

It is honouring Professor Badyal in recognition of his international standing in scientific research and “pioneering contributions” in the fields of surface science and nanolayers, along with the use of these findings in the electronics industry.

Professor Badyal is widely considered to be a leader in the field of surface science – the development of surfaces for use in everyday applications.

His work, together with that of his research group, has led to the invention of surfaces that can separate oil from water, kill bacteria, and grow cells outside of the body.

Their research has also led to the creation of bioinspired surface technologies to harvest clean drinking water in developing countries.

Professor Badyal is the second Durham University researcher to be appointed as a Foreign Fellow of NASI, after Professor Sir Arnold Wolfendale, a former Astronomer Royal, received the same honour in the 1990s.

In 2017, Professor Badyal was also the first UK-born scientist to receive the Chemical Research Society of India’s (CRSI) International Medal.

Durham University has many strong research links with India, which we plan to grow over the coming years.

We’re home to more than 200 Indian students and partner with Indian institutions in a number of research projects from neglected tropical diseases, to the response of cities to climate change, to religious practice in the Indian Himalayas.