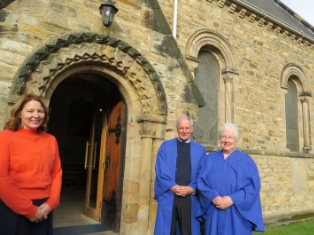 A ‘hidden gem’ church with links to the Royal family is opening to the public on a regular basis for the first time in decades.

The Church of St Mary the Less is the chapel of one of our colleges, St John’s College, and has been used for College services only since the early 20th Century.

Now the College has opened the chapel to visitors and tourists, with the help of local volunteers as stewards, as a visitor attraction and quiet space for reflection.

“We are very pleased to be sharing this wonderful, historic chapel with our neighbours, visitors and the world, and would invite anyone with an interest to come and take a look around.”

The Church was the focus of international attention in February 2018 when His Royal Highness The Prince of Wales visited.

Prince Charles inspected the memorial stone of Dame Elizabeth Bowes (1651-1736), who lived in Durham and is an ancestor of His Royal Highness through Queen Elizabeth The Queen Mother, his grandmother.

A fascinating place to visit

Visitors to the chapel can see:

The building was reordered internally in 2002.

Situated within the Durham World Heritage Site, it offers a quiet space for reflection.

The College continues to use the chapel for morning and evening services.

It was opened to the public during the 2018 Heritage Open Days, but will now be open six days a week throughout the year.

Much of this is thanks to dedicated volunteer stewards such as Jim and Pat Francis, long-standing members of the Senior Common Room at the College.

Jim, a Visiting Fellow at the College, said: “It’s a hidden gem of Durham. We hope many people will come to enjoy it.”

The Church of St Mary the Less was founded in the 12th Century by Bertram Bulmer, Lord of Brancepeth, as a garrison chapel for soldiers stationed on the nearby city walls.

Its name is believed to have been chosen to distinguish it from Durham Cathedral, which is also dedicated to the Virgin Mary, and the Church of St Mary-le-Bow, which is now the Durham Heritage Centre. Both are nearby.

It was substantially rebuilt in the 19th Century and is now Grade II-listed.

The building ceased to be a parish church in 1917 and St John’s College took responsibility for it in 1919.

A courtyard of learning

The chapel’s opening to visitors comes as work is progressing on a new Learning Resource Centre for the College, situated next door.

The Centre will be completed in early 2019, creating a courtyard of learning and study including the Centre, the College and the chapel.

The Church of St Mary the Less can be found on South Bailey, Durham, opposite St John’s College.

It is open from Monday to Friday between 9am and 5pm, and Saturdays between 10am and 4pm. Entry is free. Booking is not required.

Could you help out?

St John’s College would welcome more volunteer stewards for the chapel. If you are interested, please call +44 (0)191 334 3882 or email: johns.bursarials@durham.ac.uk