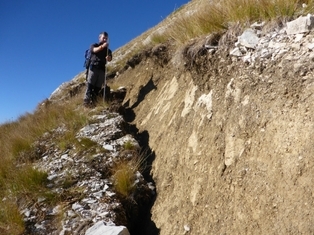 A team of researchers led by the Department of Earth Sciences has collected the first real-time measurements of Earth’s surface displacement during a major earthquake, as published in the journal Scientific Reports.

In a rapid-response study following the earthquake that occurred in Italy in August 2016, the research team developed and deployed specialised GPS receivers close to the fault line which caused the quake. Just two months later the receivers were able to precisely measure movements that occurred as a further Mw* 6.5 earthquake struck in October 2016, the largest event to occur in Italy in over 30 years.

The information gathered from this study will not only help further understanding of earthquake processes but will also help engineers to design more resilient infrastructure.

Professor Robert Holdsworth, Professor of Structural Geology in the Department of Earth Sciences gives an insight into this study and how it could help build future resilience to earthquakes.

* Mw is moment magnitude, a term used by seismologists to measure the size of earthquakes in terms of the energy released.

Q: Tell us about this project and how it came about.

A team of UK geoscientists set up by Professor Gerald Roberts (Birkbeck, University of London) has been mapping the many tens of seismically active fault strands exposed in the central Italian Apennines for more than 20 years and studying their long-term movement histories.

A Durham University team pioneered the use of laser scanning methods to measure small amounts of creep along exposed earthquake fault ruptures (afterslip) that occurred after the 2009 earthquake. With support from a Natural Environment Research Council urgency grant, the same team set out to use new low cost GNSS (Global Navigation Satellite System) receivers to detect surface slip and had placed six of these units in the vicinity of the Vettore fault which had slipped in the August earthquake. The October 2016 Mw 6.5 earthquake re-ruptured the same fault so the GNNS units were in a perfect location to capture the slip at the surface.

Q: How did you develop and deploy the sensors which have taken these precise measurements?

The low-cost Global Positioning System, or GPS, receivers were developed as part of ongoing research and development at Geospatial Research Limited (GRL), a spin-out company from the Department of Earth Sciences at Durham University. The receivers were deployed in Italy with assistance from researchers from the universities of Leeds, University College London and Birkbeck, University of London.

The process of deploying the receivers involves discussion to identify suitable geological locations for each receiver close to the fault in order to maximise the scientific value of the data collected. Each receiver, together with batteries to provide power for up to 40 days, is then carried on foot to the selected locations. Due to the remote position of the Mt. Vettore fault, most were installed in mountainous locations many kilometres from the nearest access by vehicle.

Q: What has the data from the GPS receivers revealed about the October 2016 earthquake?

The data has revealed the time taken for the surface rupture of many kilometres length to form, which is a unique observation. The data shows two things:

1) That the surface rupture started to form within three-five seconds of the earthquake occurring at 10km depth.

2) That once the rupture started to form it did so very quickly, within just two-four seconds.

The immediacy of these two observations shows that the surface rupture formed as a direct response to slip at depth during the earthquake and not as an associated secondary effect such as a landslide, which are known to form gradually over tens of seconds due to ground shaking.

The data also show that other methods of observing earthquake surface ruptures over different scales, such as from satellite imagery or directly by field geologists can be used to provide complementary insights.

Q: How do you think this research will help geologists, engineers and people living near fault lines?

The great majority of earthquakes that occur every year result from slip along geological faults buried at depth and those displacements rarely reach the surface. In seismically active areas such as Italy, however, a small number of such faults do rupture up to the surface where they produce a steep scarp with displacements of up to several metres. These are known as ‘capable faults’ and they are highly destructive firstly because a sudden fault-like offset at the surface can seriously damage major infrastructures such as buildings, roads, bridges and pipelines, and secondly because such faults are typically associated with highly destructive large magnitude earthquakes.

Our research helps geoscientists to better understand the relationships between the formation of surface ruptures and earthquakes and therefore to better predict their likelihood in the future. Many such features seem to form due to movements along known pre-existing fractures. This allows engineers and planners to either avoid such faults during construction, or to design more resilient infrastructure that can withstand, or reduce the effects of surface rupturing processes.