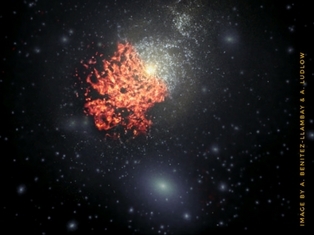 A simulated galaxy is pictured, showing the main ingredients that make up a galaxy: the stars (blue), the gas from which the stars are born (red), and the dark matter halo that surrounds the galaxy (light grey). Image by A Benitez-Llambay and A Ludlow

Further evidence of the existence of dark matter – the mysterious substance that is believed to hold the Universe together – has been produced by Cosmologists at Durham University.

Using sophisticated computer modelling techniques, the research team simulated the formation of galaxies in the presence of dark matter and were able to demonstrate that their size and rotation speed were linked to their brightness in a similar way to observations made by astronomers.

One of the simulations is pictured, showing the main ingredients that make up a galaxy: the stars (blue), the gas from which the stars are born (red), and the dark matter halo that surrounds the galaxy (light grey).

Until now, theories of dark matter have predicted a much more complex relationship between the size, mass and brightness (or luminosity) of galaxies than is actually observed, which has led to dark matter sceptics proposing alternative theories that are seemingly a better fit with what we see.

The research led by Dr Aaron Ludlow of the Institute for Computational Cosmology, is published in the academic journal, Physical Review Letters.

Most cosmologists believe that more than 80 per cent of the total mass of the Universe is made up of dark matter – a mysterious particle that has so far not been detected but explains many of the properties of the Universe such as the microwave background measured by the Planck satellite.

Alternative theories include Modified Newtonian Dynamics, or MOND. While this does not explain some observations of the Universe as convincingly as dark matter theory it has, until now, provided a simpler description of the coupling of the brightness and rotation velocity, observed in galaxies of all shapes and sizes.

The Durham team used powerful supercomputers to model the formation of galaxies of various sizes, compressing billions of years of evolution into a few weeks, in order to demonstrate that the existence of dark matter is consistent with the observed relationship between mass, size and luminosity of galaxies.

Dr Ludlow said: “This solves a long-standing problem that has troubled the dark matter model for over a decade. The dark matter hypothesis remains the main explanation for the source of the gravity that binds galaxies. Although the particles are difficult to detect, physicists must persevere.”

Durham University collaborated on the project with Leiden University, Netherlands; Liverpool John Moores University, England and the University of Victoria, Canada. The research was funded by the European Research Council, the Science and Technology Facilities Council, Netherlands Organisation for Scientific Research, COFUND and The Royal Society.