Restart of the Large Hadron Collider could lead to “new discoveries” 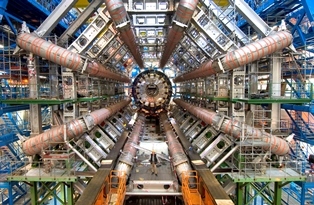 The restart of the Large Hadron Collider (LHC) could lead to “fundamental breakthroughs” in our understanding of the Universe, according to a Durham University expert.

The LHC particle accelerator was restarted at the weekend after a shut-down lasting two years (Sunday April 5).

The LHC will be running at almost double the energy of Run One when scientists announced they had discovered the Higgs boson.The Higgs generates masses for other elementary particles via the Higgs mechanism and without it the Universe would not remotely look like anything we see today.

During its second three-year run, scientists hope the LHC, based at CERN in Geneva, will open a new window for potential discovery, allowing further studies on the Higgs boson and potentially addressing unsolved mysteries such as dark matter.

Scientists at Durham University’s Institute for Particle Physics Phenomenology (IPPP) are providing the theory and analysis behind a number of the experiments at the LHC including ATLAS, the Compact Muon Solenoid (CMS) experiment and the Large Hadron Collider beauty (LHCb) experiment.

Professor Valya Khoze, Director of the IPPP, at Durham University, said: “The start of the LHC Run Two is the most important date in the particle physics calendar this year.

“The particle accelerator will now run at nearly twice the energy of the earlier Run One of the LHC, which has delivered the Higgs boson discovery.

“During the Run Two the LHC experiments will continue their search for new fundamental constituents of matter - now at the 13 TeV energy scale - and they will also probe deeper into the properties of the Higgs boson.

“The start of Run Two is the beginning of a long, painstaking and careful process of collecting and analysing the new data — the process which is expected to run for many years and we all hope will ultimately lead to new discoveries and fundamental breakthroughs in our understanding of the fundamental constituents of the Universe.”