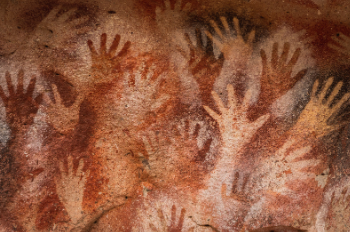 Professor Paul Pettitt from our Department of Archaeology explains why a new hypothesis that focuses on low oxygen levels fails to explain the majority of cave art.

Long before the emergence of writing, palaeolithic cave paintings represent the very first examples of human visual culture. They provide a shadowy glimpse of a prehistoric world in which signs were beginning to be used to communicate meaning.

Archaeologists have long been fascinated over what exactly compelled “cave men” to produce these enigmatic paintings. Because they’re often located in caves – enchanting and atmospheric places in their own right – certain experts have argued that prehistoric painters may have produced their art under the influence of “altered states of consciousness”. The theory essentially claims the painters in some way got high.

In support of this theory, a new study has found that low oxygen levels in poorly ventilated caves can induce hypoxia, which can inspire hallucinations. But while the theory is certainly plausible, here’s why I think it fails to explain the majority of cave art.

Over 65,000 years ago, the Neanderthals left finger dots and hand stencils on European cave walls. These basic markings were made using ochre, manganese and charcoal – common materials in Neanderthal life, likely also used to ornament the body.

Eurasian figurative art – featuring representations of people and animals – appeared some 40,000 years ago in Indonesia and 37,000 years ago in Europe. This appears to have been exclusive to the successors of Neanderthals: Homo sapiens.

These people’s images of herbivorous prey animals were carved, engraved and painted on bone, stone and mammoth ivory – and on the walls of caves. The overwhelming dominance of prey such as horse, bison, deer and mammoth reflects the critical importance of these species to survival in the harsh environments of the Pleistocene north.

But why figurative “cave art” emerged and how it functioned has baffled archaeologists since its rediscovery and authentication in the late 19th century. Whether they’re simple stencils of hands or complex drawings of prey, cave paintings are a window into the minds of the very first artists. Scholars believe that knowing what inspired them could teach us something about the very human compulsion to express ourselves creatively.

Successive theories have purported to explain the origins of ancient art – a rich and varied collection that we know was added to over at least 50,000 years of prehistory. Yet these theories inevitably say more about their proponents than about the motives of Pleistocene man.

To the Victorians, those motives boiled down to pure aesthetics. In the 20th century, scholars began to believe the paintings had a magical function, and theories of hunting and fertility magic arose to explain drawings of animals and sculptures of “venuses”.

As we entered the information age, the images came to be seen as repositories of ecological information – recording details about things like prey animals and their behaviour. And by the 1980s, the worst excesses of new age thinking promoted the idea that cave art was the product of altered states of consciousness and the visions that can go hand in hand. Since then, the notion has never gone away.

But what could have caused ancient altered states? Psychoactive substances other than fly agaric (the red and white topped mushroom) were not present in Pleistocene Eurasia. Ingesting ochre or manganese would give you a poor stomach, not hallucinations.

The new study has proposed altered states instead caused by low oxygen levels, produced by small hearths and simple animal-fat lamps that would have been burning in confined caves. The authors claim this could have induced hypoxia (oxygen deprivation), leading to hallucinations which, in turn, stimulated creativity in the form of cave art.

Typically, around 21% of air is oxygen. Any reduction below 18% produces a mild hypoxia, and below 13% produces severe hypoxia. The study uses computer simulations to demonstrate the plausibility of this new theory, while drawing on ethnography – notably the ubiquity of “shamanic” belief systems among hunter-gatherers, and the idea that caves form a link between this world and others.

It’s plausible that altered states stimulated some cave art. But it’s just as plausible that hypoxia in caves produced far more common symptoms of weakness, headaches, drowsiness, nausea and breathlessness, which don’t sound inspiring to me.

In any case, cave chambers vary considerably in size and are often decently ventilated. Niaux’s Salon Noir in southwestern France is positively cathedral-like, and features many cave paintings. Many examples of cave art are also complex and highly skilled compositions that took hours to produce – they’re unlikely to be the product of hallucinations.

France is home to many of the world’s most impressive prehistoric cave paintings.

It’s difficult to falsify the new hypothesis scientifically – but even if it’s true, what would it really tell us? At best, altered states could provide a mechanism but not an explanation for some Palaeolithic art. If they did cause some individuals to create, they would not explain the content, themes, style or wider function of the art.

To discuss altered states is therefore as meaningless as making the observation that the tomb builders of Egypt’s Valley of the Kings drank beer: we know that, but we can be sure that it wasn’t drunkenness that stimulated them to create the art on the walls of the tombs they built.

I have spent enough time underground, observing cave art in its context, to understand how making simple links between hallucinations, shamanism and cave art fails to do justice to the remarkably complex works created by early artists in these mysterious places.

But why are altered states perennially popular explanations for Palaeolithic cave art? It’s probably because caves are mysterious, suggestive places, triggering responses in our brains such as pareidolia – our evolutionary propensity to give meaning to natural things, like finding faces in clouds.

In our everyday lives, we constantly toggle between mild altered states of consciousness. They make our imaginary lives immensely rich, and may go some way to explaining how early art took the form it did. Ultimately, imagination is far richer than trance – and we do a disservice to our prehistoric ancestors when we argue their art was the product of a “high” rather than creative expression.