Reflections on mass testing as the UK moves out of lockdown 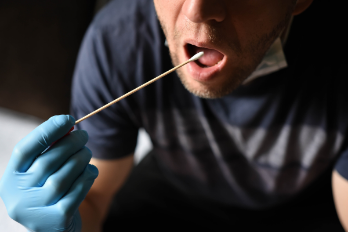 Professor Jacqui Ramagge, our Executive Dean for Science, and Associate Professor Camila Caiado, from our Mathematical Sciences Department, who have led our Lateral Flow Testing programme, reflect on mass testing as the UK moves out of Covid-19 lockdown.

In October 2020 we were asked to run a service evaluation of lateral flow testing at Durham University to assess the feasibility of the use of rapid tests at scale.

Those who showed symptoms already had access to testing, so our aim was to use rapid tests to quickly identify those who were infectious asymptomatic carriers of the virus, help them to isolate, and minimise the need for isolation by others.

We were the first who sought, and received, approval from the Department of Health and Social Care (DHSC) for a protocol whereby participants self-administered tests after undertaking training. We did this because we thought it gave us the best chance to scale testing to a university-wide level.

To date we have trained over 11,000 people and reported over 30,000 test results and, in partnership with the Durham County Council public health team, we have contained all outbreaks in the University community.

'I want to protect others'

Participation in the testing programme is entirely voluntary, and when we surveyed our students and asked them why they were taking the tests, the three most popular answers were:

The third-ranked response is interesting given that over 87% of respondents understood that a negative result was not a guarantee that they were free of infection, in the sense that they understood there was a small chance of a false negative.

The altruistic feelings in the most popular answer may have been influenced by the way in which invitations to test are communicated. From the start of the programme we have worked with colleagues in behavioural psychology, the University communications team and student leaders to get the messaging right. Phrases such as ‘Test regularly, stay safe, protect others’ and ‘Test regularly, protect others, let’s stop the spread of Covid-19 together’ have been deployed across multiple channels including social media, digital screens on campus, emails and posters in colleges and at testing sites.

The best way to reduce infections...

We think communication will be the key to the success of the mass testing initiative announced by the UK Government that started on Friday 9 April. The plan is to make enough Lateral Flow Tests freely available so that anybody who wishes to do so can self-administer a test. This is a major national initiative, and it is worth identifying the rationale for taking such an approach.

The worst-case scenario is that a new variant appears that is highly infectious, has a high mortality rate, has a higher risk of reinfection, and against which current vaccines are ineffective. Given that the virus can mutate each time it infects someone, each new infection is an opportunity for a new variant to appear.

The best way to reduce the number of infected people is to break the chain of transmission, and the most effective way to do this is to ensure that infectious people isolate. Ideally, this would be done while minimising unnecessary isolation for those who are not infectious. This can be achieved by identifying infectious people early, helping them isolate, and quickly checking whether any of their close contacts have been infected.

About one in three of people who are infected with the virus are asymptomatic, and even when people eventually develop symptoms, they can be infectious before they show any symptoms. Testing asymptomatic people is necessary in order to break the chain of transmission along with an effective mechanism to test, trace, and isolate.

There’s a lot of discussion of the relative merits of LFT and PCR tests. Why would we use one test over another?

The most notable points are as follows:

One solution is to offer LFT regularly enough to identify infections early. This would mean testing about every four to five days or roughly twice a week. No test is perfect, so those testing positive on LFT should have a confirmatory test, which could be another LFT or a PCR test. The probability of two false positives on any combination of LFT and/or PCR tests is very low, so action could be taken on the result of the confirmatory test.

The advantage of using a PCR test for confirmation is that it is more sensitive. Laboratory capacity to get the results would not be an issue unless large numbers of people test positive on LFT and then take a confirmatory PCR. In that case prevalence would be high and we should then be isolating just on the basis of a positive LFT.

The disadvantage of using PCR tests for confirmation is that those confirmed as negative would have isolated while their PCR test was being processed due to their first positive LFT result. Although less 0.3% of LFT are false positive results, even this small percentage represents a large number of people when scaled by the size of a nation, but the alternative is not testing and potentially having a new variant start another pandemic.

It is not yet clear when university students will be able to return to face-to-face classes even though there is no evidence of transmission in university classrooms. In contrast, schools and colleges have already been told they will be having in-person classes. The difference is that school students tend to go to school locally, whereas it is common for university students to be studying some distance from home. Travel, both national and international, aids the spread of the virus.

However, using face-to-face teaching as a mechanism to influence travel is likely to have a limited impact. There is more to a university experience than sharing a classroom with colleagues, and university students are likely to return to campus irrespective of whether face-to-face teaching is taking place. We may instead find ourselves inadvertently amplifying inequities.

Some studies already show that current vaccines afford limited protection against some variants such as B.1.357 (sometimes called the South African variant) which is highly infectious as well as deadly. It currently constitutes less than 1% of infections in the UK but over 18% of infections in some countries overseas (see here for Luxembourg for example).

A good system of test, trace, and isolate is our best chance to get the country back to some semblance of normality in a reasonably responsible way. In the meantime, expect the Government to be cautious about anything involving travel and remember that every pandemic starts with one infection.