Sarah Everard: why women shouldn’t have to risk trading their freedom for safety 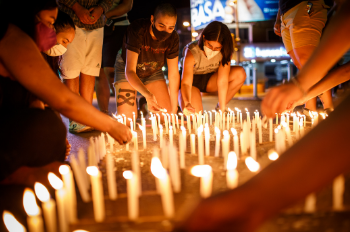 Dr Hannah Bows from our Law School explains how penalising and physically handling women at a vigil didn’t just ignore some women’s fears of authorities, it suggested that women shouldn’t be speaking out at all.

Earlier this month, Sarah Everard was allegedly abducted and killed while walking home from a friend’s house in London. In response to her disappearance, women were reportedly advised to avoid going out alone. Yet at the same time, the Metropolitan Police commissioner, Cressida Dick, sought to reassure women that incidences of abduction and murder are rare.

Heavy police presence and use of force during a recent gathering to remember Everard also raised issues about the way women are treated by authorities when demonstrating against sexual harassment and violence. It’s an issue which, in some circles, has led to demands for police reform and Dick’s resignation as commissioner. As one popular argument goes, penalising and physically handling women at a vigil didn’t just ignore some women’s fears of authorities, it suggested that women shouldn’t be speaking out at all.

These contradictory messages underscore the problems surrounding discussions about violence against women. On one hand, sexual harassment and violence by men is viewed as inevitable and we’re conditioned to believe the fear we live with is normal. On the other, women are often told they’re overreacting and that violence is rare. But how helpful are these approaches in terms of eradicating systemic violence against women? And do they keep us safer?

Just two years ago the police issued similar safety advice to women in response to a number of sexual assaults in London. They were told to avoid wearing headphones or using mobile phones in order to be “alert” in their surroundings. But this advice ignores that reality that many women already do this, and more, to avoid harassment and violence from men.

Recent research has documented the different types of “safety work” women routinely undertake to avoid the everyday intrusions from men in public. As a result of these precautions, women pay a price, a form of gender-specific tax – they must trade-off their freedom in exchange for safety.

In reality, there is very little evidence that individual strategies reduce sexual violence. Nevertheless, failure to follow the safety advice almost inevitably means a woman is held at least partially responsible – the idea being that if she’d listened to advice, changed her behaviour or stayed home, she would have been safe.

As news spread of Everard’s case, thousands of women took to social media to share the extensive precautions they make on a daily basis to avoid risks – including avoiding dark streets, not wearing headphones when out alone, crossing the road to get away from individual or groups of men, and holding keys in their hands should they need to defend themselves or open their front door quickly.

This practice of taking responsibility to protect oneself is nothing new. Women are told of the dangers in public places from a young age and that they should manage the risks that men pose by adapting their behaviour and restricting their movements accordingly. It’s advice that women internalise, becoming hypervigilant of themselves, and others, in public spaces.

When women do speak out, they often experience aggressive backlashes, primarily from men who often argue that #NotAllMen engage in such behaviour. This common response to women’s experiences of harassment and violence serves to undermine their accounts, dismiss them, or suggest that it is they who are sexist by suggesting all men behave in harassing or violent ways. Yet the evidence indicates that harassment and violence by men in public spaces is disturbingly prevalent, some of which has come to light in recent years through the #MeToo and #EverydaySexism movements.

Although the more extreme physical manifestations of violence such as abduction or murder are relatively rare, almost all women experience sexual harassment in public spaces, and a significant proportion report being sexually assaulted. And when women are subjected to serious physical violence or murder, it is overwhelmingly men who perpetrate it. This is often despite extensive safety work from women.

These conflicting messages leave women in a paradoxical situation whereby they have to change their behaviour to avoid the risk of harassment or violence, while also trying not to overreact to dangers they’re often told do not exist or aren’t common. They must have, what my colleague Fiona Vera-Gray has termed “the right amount of panic”. Because of this, the focus is always on what women do and do not do – and the problem of male violence remains obscured.

While it’s true that not all men engage in these behaviours, if they do nothing about them, they are complicit in a society that normalises them. Safety advice rarely tells men not to harass or rape women. And if they do, they’re protected by the focus on what the woman failed to do to protect herself.

Following the outpouring of women’s stories on social media in response to Everard’s death, many men have acknowledged the privileges they enjoy in public spaces – such as freely being able to walk the streets at night without fear of sexual harassment or assault – things women cannot take for granted.

Some asked what they could do to help. Popular responses include giving women space, dropping back while walking behind a woman on her own or, ideally, crossing the road and walking ahead of her to reduce her sense of unease. Others involve men calling out sexual harassment when they see it or asking a woman if she’s OK if it appears that she’s being subjected to unwanted attention. Much of this advice comes from women, who yet again carry the burden of educating men.

If anything is going to change, a dramatic culture shift is needed. The widespread prevalence of violence and harassment also needs to be acknowledged – and challenged – without putting the responsibility on women. We don’t need more safety advice, nor do we need telling the risk to us is low. What we need is for men to change their behaviour and for society to hold them accountable.