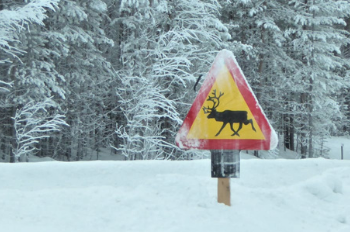 Reindeer, or caribou as they’re known in North America, are impressive travellers. Herds made up of many thousands of animals can cover 5,000km each year in the far north of Europe, Siberia and Canada. This is one of the longest land migrations on Earth – but an ongoing transformation of the Arctic landscape threatens to break it up.

Roads, railways, mines and dams have disrupted the well-worn trails that reindeer follow each year, particularly across northern Europe. In one study, researchers found that reindeer in Norway lost 70% of undisturbed habitat during the 20th century. In Finland and Sweden, the figure is thought to be similar.

Even developments that might seem environmentally benign, or even beneficial, are now contributing to the problem. The number of wind turbines in Norway has quadrupled over the last decade, and reindeer herders recently filed a lawsuit against developers hoping to build what would be one of the country’s largest onshore wind farms.

In a relatively small amount of time, reindeer have lost access to large grazing areas and many indigenous Sámi reindeer herders are now forced to buy feed to help the animals survive. In the rush to build a green economy that can tackle the warming that threatens the Arctic, industries risk reinforcing processes that harm the people and wildlife living there.

Food can be scarce in the Arctic winter, so reindeer must keep moving to find enough. In spring, pregnant reindeer congregate for weeks in calving grounds to give birth and nurture their newborn. When summer arrives and the snow melts, mosquitoes and bot flies swarm in huge numbers. The insects burrow into the skin of reindeer and agitate them, forcing them to move into the mountains or to the coast where the air is cooler and the winds stronger.

The indigenous people of northern Europe, the Sámi, first tracked and hunted reindeer thousands of years ago, and have been herding them since at least the 17th century. The reindeer instinctively follow their traditional migrations, but they’re occasionally gathered together or ushered onwards by the herders – previously on skis, but more recently on snowmobiles and quad bikes.

For a long time, reindeer herders have organised themselves into groups called siidas. Each siida has an area of land in which their reindeer can roam, and herders make sure the animals stay within their own patch and don’t graze the land of other siidas. This system of managing reindeer and grazing provisions has worked well for centuries, with the Sámi treating northern Norway, Sweden, Finland and Russia as one landmass.

But in 1751 and 1826, the borders between these states were closed and the movement of reindeer between them stopped. Reindeer and herders were moved from border regions, preventing reindeer from following their traditional migrations and halting trade and exchange that had sustained herders and the settled population for centuries.

With the advent of trains and cars, roads and railways were built across the north, slicing through some of the remaining migration routes and forcing animals to cross and risk a collision that could kill them and the driver. The alternative for herders is to load reindeer into trucks and drive them across these potentially lethal barriers, which is as costly and arduous as it sounds.

Green energy projects, which benefit life in the Arctic in the long run, can also act as a threat. Reservoirs for hydroelectric dams were built in large numbers over the 20th century – 15 of them along the Luleälven River and its tributaries in Sweden. This flooded many Sámi villages and sacred sites, and wiped out vast grazing areas.

Now onshore windfarms are at the forefront of green energy development in northern Europe. While wind turbines don’t take up too much space, their noise and movement scares reindeer away, preventing them from grazing nearby.

Research is underway to determine how developments can protect reindeer herding. In forestry, experts have studied how to schedule tree felling so that reindeer have protected routes where there is less noise and patches of undisturbed vegetation they can eat as they travel.

Wildlife corridors are another potential solution. These are bridges built over roads and rail lines that allow reindeer and other species to cross. It’s hoped that these could reconnect reindeer to their traditional migration routes, without having to be diverted or forced to navigate traffic.

Predators can spend a lot of time at these crossings, either to get across themselves or to ambush prey who must pass through a bottleneck. This can deter prey species such as reindeer from using them. How well these crossings match with migration routes, the local topography and the amount of human activity surrounding the bridge can all have a notable impact on whether they’re used. These are factors which aren’t always obvious before construction.

If the effort to tackle climate change with renewable energy is to gain support in the region, it must also preserve the unique culture and ecology of the Arctic.