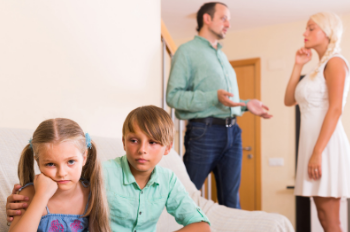 In this article, Dr Paddy Ross from our Department of Psychology, explains that according to new research he carried out with his team, children prioritise sound over sight when identifying emotions.

It’s 7:30am on a Monday morning and you’re trying to get your little darlings out of the house for school. The week has only just begun but already you can feel your temper being tested: your children appear to be physically incapable of getting dressed. You put on a nice faux smile and implore them through gritted teeth to “get dressed right now”. Despite your best efforts, though, somehow your real emotions have shone through: your children have started to cry.

This situation will be familiar to many parents – myself included. Numerous times, I’ve tried to conceal how I’m really feeling when talking to my daughter by “putting on a brave face” that I hope masks my true feelings. However, my team’s new research suggests that all of this effort might actually be in vain.

We’ve found that children prioritise sound over sight when identifying emotions – which means that the emotion you carry in your voice’s tone, volume and pitch registers with your kids despite the careful physical mask you put up to hoodwink them. As such, rather than putting on a brave face in difficult moments, parents should perhaps try to “put on a brave voice” instead.

Our research was inspired by the esteemed psychologist Francis Colavita, who ran an experiment in the 1970s that produced a curious result. When presented with flashes of light (visual stimuli) and tones (auditory stimuli) at the same time, adults tended to ignore the auditory stimuli and only report the visual ones.

This was coined the “Colavita effect” and was taken as evidence of visual dominance in adults. More recently, the opposite was found in children. Under the same conditions, children – those up to the age of around eight – tended to report the auditory stimuli and ignore the visual. This was dubbed the “reverse-Colavita effect”, a case of auditory dominance.

Since this research was published, the limits of the effect on children have been tested. Instead of simple flashes and tones, more complex stimuli – like pictures of animals and the sounds they make – have been used. For instance, these studies found that when shown a picture of a dog accompanied by the sound of a cow, children would only report what they heard – not what they saw.

This demonstrated that the reverse-Colavita effect wasn’t simply due to a preference for tones over flashes like in the original study, but instead appeared to be a preference for any auditory stimuli, even complex and meaningful sounds. These sounds were so dominant that they are all the child would report perceiving.

We presented adults and children (aged between 6 and 11) with these images and sounds in different combinations, both matching and mismatched. A happy body and a happy voice made for a matching pair of stimuli, whereas a sad body with an angry voice would be a mismatched pair of stimuli.

We asked our participants two things. First, we asked them to ignore what they saw, telling us instead the person’s emotion based on the voice. Adults and children could do that no problem. Then we showed exactly the same stimuli but this time asked them to ignore what they heard and tell us how the person felt based on their body. Here again the adults could do this with no difficulty, but the children found this extremely difficult.

When viewing a picture of a person cowering in fear, for example, children in our study would tell us that person was happy if they heard a laugh at the same time. In effect, children could not ignore auditory stimuli when judging emotion. Our study is the first evidence of an auditory dominance in children when detecting and recognising emotion.

The implications of these findings go beyond just avoiding tantrums. Currently, huge efforts have been made by teachers to make online learning as engaging as possible for home-schooled children during the pandemic. Given our findings, perhaps lesson design should focus less on the visual elements, and more on auditory elements.

If a child’s perception of what they see can be so influenced by what they hear, then their sensory environment may matter a great deal. Our findings suggest that, for remote lessons at least, children may actually benefit from working with headphones on or earphones in – to avoid competing, confusing auditory stimuli.

In any case, next time you want to conceal how you really feel from your child, it may be worth remembering that it’s your voice that will betray you – not your face or your body language.