Why have plans for the UK Holocaust Memorial stalled? 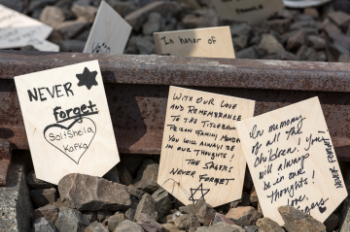 Despite considerable support, concerns over plans for a new UK Holocaust Memorial range from location and cost, to how it should look and whether we need such a building at all. Daniel Adamson from our Department of History explains why it's so important to overcome these obstacles.

Remembrance of the Holocaust is essential if new generations are to be aware of the atrocities committed against the Jews and other groups during the Second World War. Since 2001, the UK has marked Holocaust Memorial Day annually. Under David Cameron’s premiership, the Holocaust Commission was tasked with coming up with measures to ensure a lasting commemoration of the Holocaust and its lessons within British society.

In January 2015 plans for a memorial and learning centre in London were announced. In July 2016, Victoria Tower Gardens in Westminster was earmarked as a site for the project.

In the autumn of 2020, a planning inquiry for the proposed memorial provoked widespread public debate regarding the viability of the project, and it has been contentious ever since. There are disagreements over its location, how it should look, the cost, and indeed whether such a building is needed at all.

Valuable contributions to the discussion have been made by figures from a range of different disciplines. But a prolonged stalemate is threatening a project that is the ultimate opportunity for a meaningful contribution to the Holocaust memory.

At face value, the proposed UK Holocaust Memorial and Learning Centre is a promising prospect. Its mission statement makes a compelling case for a “permanent reminder of the responsibilities of citizens in a democracy to be vigilant and responsive whenever and wherever those values are threatened”. Few would argue against the importance of preserving “the memory of the Holocaust whilst also considering its contemporary relevance”.

Its remit seeks to encourage Britain to critically engage with its own uncomfortable past in relation to the Holocaust, the kind of reflection that has been somewhat lacking of late in the UK – as the recent Proms furore over the singing of the words to Rule Britannia and Land of Hope and Glory, revealed.

Speaking in 2019, Eric Pickles, co-chair of the UK Holocaust Memorial Foundation pledged to “look at our history in an unblinkered way”. Presumably, this would include considering more contentious British responses to the Holocaust, such as the assessment in 1944 that bombing Auschwitz was unfeasible. Despite knowledge of the existence of the Nazi concentration camp, British high command decided to focus efforts towards victory in the land war instead.

Even though the project has gained support from several prominent parliamentary figures, the proposals for the Holocaust Memorial have attracted criticism from elsewhere.

The planned construction right next to the Houses of Parliament, the symbolic heart of British democracy, is controversial. Given the current fractured state of the British union, alongside a culturally diverse population, the concept of a “permanent statement of our British values” seems somewhat problematic.

A letter to the planning inquiry authored by several leading Holocaust researchers suggested that the location of the memorial is “likely to create a celebratory narrative of the British government’s responses to the Jewish catastrophe during the Nazi era and beyond”. The historical reality was far more nuanced, and marked by ambiguous responses at the time.

It might also be questioned whether London needs another site of Holocaust education. Holocaust galleries already exist in the capital at the Imperial War Museum and the London Jewish Museum. Elsewhere, Holocaust Centres located in Nottinghamshire and Huddersfield have highlighted the importance and value of spreading Holocaust education across the UK.

Practical considerations have also been debated. The aesthetics of architect David Adjaye’s bronze vision for the centre are not to everyone’s tastes. In the wake of the economic hardship entailed by coronavirus, a costing estimate of at least £50 million is alarming, especially when the building would be relying on public funds. Perhaps the money would be better spent supporting existing educational programmes, such as those offered by the Holocaust Educational Trust.

It is also a sad reflection on the modern world that the presence of a public memorial in central London is deemed by some to pose a serious security risk. Other objections have centred on matters more common to most construction projects, such as the environmental impact. The Royal Parks charity has described the grade-II listed Victoria Tower Gardens as “a sensitive location”.

Discussions over the ideal outcome show little sign of ending. If debate is too protracted, the opportunity might disappear entirely. Action is required and will likely require compromise.

The viability of the Holocaust Memorial may still be up for discussion. But ongoing measures are still needed to tackle the spread of online Holocaust denial. A new Holocaust memorial in the UK has the potential to enrich public understanding of the genocide and address associated social issues, including continuing antisemitism.

Too often this project has been framed in vague platitudes. Instead, the chance to diversify the geography and perspectives of British Holocaust memory should be welcomed.