Harold Evans was a titan among the greats of British journalism 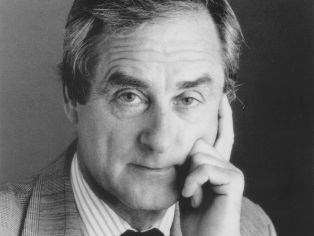 Among the select band of truly great editors who have led British newspapers with sovereign authority, Harold Evans – who has passed away, aged 92 – stood out as a titan. The working-class boy who left his local state school at the age of 16 to learn his trade on the Ashton-under-Lyne Weekly Reporter first occupied an editor’s chair as an undergraduate at Durham University.

While studying politics, Evans edited Palatinate, the independent student newspaper, at a time before television challenged the authority of printed news. Subsequent experience on the Manchester Evening News and Northern Echo gave him a taste of the power and responsibility exercised by newspapers in an era when British national dailies achieved their peak circulations.

The achievements that earned him national attention came during his editorship of The Sunday Times between 1967 and 1980. His determination to investigate, expose and explain the Thalidomide scandal set a courageous example of a newspaper speaking truth to power in the public interest and in the teeth of ferocious opposition. For this achievement, Evans deserves as much credit as a less well-known but equally brave predecessor.

Arthur Mann, who was editor of the Yorkshire Post between 1919 and 1940, had the courage to oppose appeasement consistently and boldly despite leading a newspaper owned and financed by Conservative interests. For this, Mann was heartily despised by then prime minister, Neville Chamberlain, who made no secret of his contempt. Despite huge pressure from his proprietors, Mann maintained intelligent opposition to appeasement throughout Chamberlain’s premiership.

Things they don’t want you to read

Evans faced at least as much pressure when he took on the legal and political power of The Distillers Company, the makers of thalidomide in the UK and his newspaper’s most lucrative advertiser. Standing by the work of the Insight investigative team he had founded – and showing no sign of faltering despite colossal financial and reputational risks – Evans fought for his story all the way to the European Court of Human Rights. When, in 1979, the court ruled that the Sunday Times could publish without restraint, the British government was obliged to change the law of contempt of court.

That victory was celebrated as a triumph of truth established through investigative reporting. It was also evidence of Evans’ strength as an inspiring leader. Dennis Griffiths, the leading historian of Fleet Street, recognises that among Evans’ great skills was his ability to bring together excellent reporters and coordinate their efforts to superb effect.

He led his team’s efforts to expose sanctions-busting by supporters of the apartheid regime in Rhodesia. Evans also indentified Kim Philby as a member of the Cambridge Five spy ring, which passed information to the Soviet Union during the second world war and at the beginning of the cold war.

In a campaign to prove the innocence of Timothy Evans (1924-1950, no relation), wrongfully convicted and hanged for the murder of his wife and infant daughter, Harold Evans demanded an official inquiry while editor of the Northern Echo. At the Sunday Times, his persistent focus on this egregious miscarriage of justice helped to bring about abolition of the death penalty.

Giant of the craft

Evans deserves our respect because he never wavered from the view that a newspaper is much more than a commercial product designed to generate profits by selling a commodity called news. He treated the newspapers he led as flawed but valuable agents of democracy, using them to achieve the outcomes the leading media academic Professor Michael Schudson, in his widely respected 2008 study: Why Democracies Need an Unlovable Press, calls “things news can do for democracy”.

Throughout his career, Evans proved through his deeds that painstaking, accurate reporting can expose wrongdoing and help to correct the balance of power between citizens and those who govern in their name.

There have been few like him. For this author, Mann came closest, followed by WT Stead who, as editor of the Pall Mall Gazette in July 1885, published “The Maiden Tribute of Modern Babylon” a pungent expose of child prostitution in London and the first true example of investigative journalism. Paul Dacre of the Daily Mail showed courage by identifying in 1997 the men he believed to be guilty of the murder of Stephen Lawrence.

However, one other British editor, Alan Rusbridger, who was editor-in-chief of The Guardian between 1995 and 2015, deserves mention. Rusbridger displayed real courage and skill when in August 2013 he published information leaked to the Guardian by Edward Snowden, the American whistleblower who copied highly classified information from the National Security Agency.

It is telling that Rusbridger paid tribute to Evans, writing that he “invariably turned to Harry for advice”, because Evans had “been there, done it” and “got the campaign medals”.