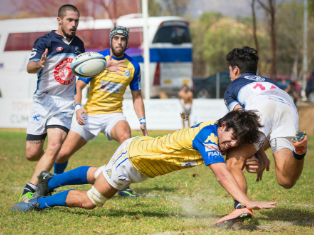 Photo by Quino Al on Unsplash

Dr Karen Hind from our School of Sport and Exercise Sciences explains why many retired players report injuries last long after they stop playing.

Rugby brings a risk of injury at all levels of the game. But for professional rugby players, there’s an even higher risk of injury. And often, these injuries can last a long time. Our research found that compared to athletes from non-contact sports, retired elite and amateur rugby players were between two and ten times more likely to suffer from injuries – including concussion and knee-ligament injuries. Over half also reported osteoarthritis following retirement.

Rugby is a popular sport played by over 8.5 million people around the globe. There are two types of rugby: rugby union and rugby league. Both are played in two halves of 40 minutes, but they differ by number of players (15 for union and 13 for league) and rules of the game.

While injury audits are regularly conducted by governing bodies at the semi-professional and professional levels to understand how to better help players prevent and recover from injuries, these studies are limited to one or two seasons. This makes it difficult to see the longer-term injury toll for players.

Our research was conducted as part of the Global Rugby Codes Health Research Programme led by researchers at Auckland University of Technology and Durham University. We examined the total reported injuries across a rugby player’s career, as well as the continued impact of injuries following retirement. We looked at 189 UK elite and amateur rugby union and league players, as well as 65 retired athletes from non-contact sports – mainly cricket.

Concussion was the most frequently reported injury for elite (81%) and amateur (76%) rugby players, and knee-ligament injuries affected 68% of elite players and 48% of amateur players. These injuries were also more likely to be recurrent. This suggests players might be returning too quickly, without giving injuries enough time to heal. Repeated exposure to risk may also be causing recurrent injuries. 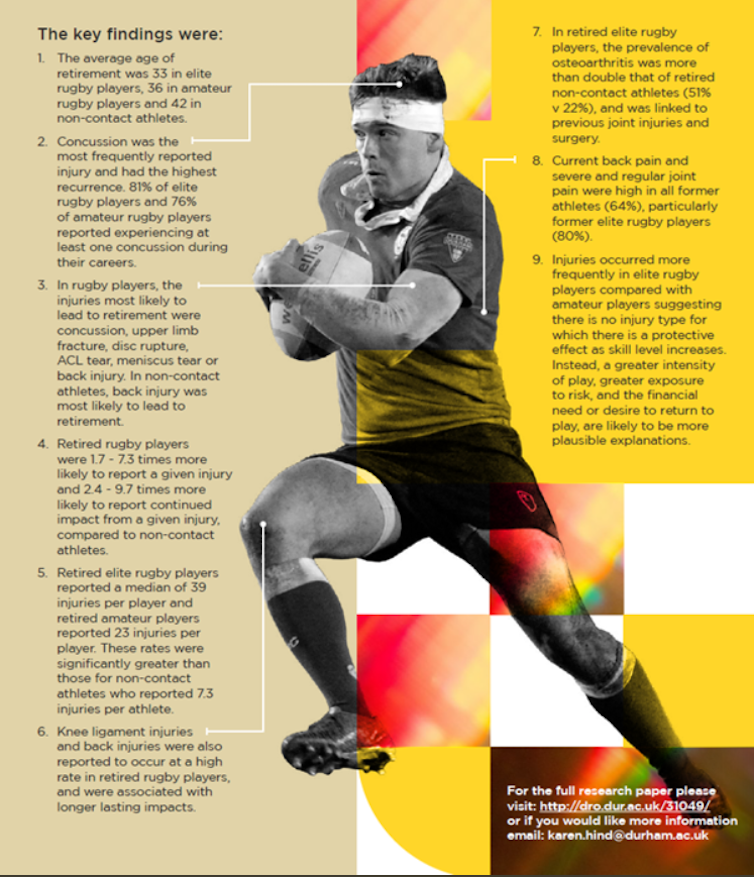 It’s worth noting that although it’s been suggested that increased skill and proficiency can reduce the risk of certain types of injuries, our study found that injury numbers were consistently higher in elite-level players than in amateurs. This could suggest that the higher levels of injuries in elite players might reflect an increased exposure to risk through training and intensive match play, or that they’re playing with niggles or injuries because professional rugby is their main source of income.

Former players, particularly at the elite level, reported that previous injuries continued to affect them even after retiring. They were two to ten times more likely to report long-term impact from an injury compared to retired athletes from non-contact sports.

The injuries that continued to affect former players during retirement were concussion, neck injuries, shoulder dislocation and knee ligament injuries. For concussion, this is concerning given increasing evidence shows a link between concussions and reduced neurovascular, and brain function.

We also found 64% of former elite rugby players suffer from severe and regular joint pain, and 80% reported back pain. Elite players also had a twofold greater risk for osteoarthritis. Given that the average age of former elite players in this study was 43 years, this suggests the premature onset of this disease.

However, we need to continue efforts to minimise concussion and musculoskeletal injuries in contact sports. In particular, little attention has so far been given to preventing knee-ligament injuries. It is also clear that while support for players has improved, support for retired players is lacking. Our research identifies the pressing need for educational, rehabilitation and injury management support for players post-retirement, with consideration of those injuries most associated with long-term impacts.