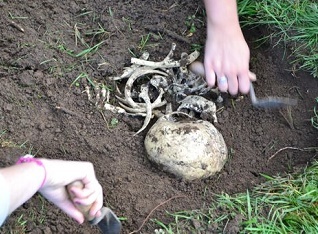 The dead are never really gone. In archaeology and the forensic sciences, that’s quite literally true. Though people tend to think that mortal remains quickly turn to nothing, in reality, the human body is very resilient and can persist for hundreds and even thousands of years.

Most people will have heard of Egyptian mummies, and how even as long ago as 2600 BC, people knew how to preserve their dead so successfully that they have endured until the present day. But even without human help, ancient human remains in South America have persisted as the climate dries the body out and slows down bacterial decay. Caves in less extreme environments can be dry and cold enough to preserve human remains, such as Schmerling in Belgium, which was where the first bones of our Neanderthal relatives were discovered.

Today, the so-called rainbow valley on the north side of Mount Everest displays the bodies of climbers who have died trying to reach the Himalayan peak. Their brightly coloured jackets give the place its name and the extreme cold has stalled decomposition.

But even when bodies decompose completely, the trace of a life can still be found. As archaeologists and forensic scientists, we rely on this to understand how lives suddenly end and the world in which a person lived and died. But these stories aren’t just academic – our research can help support investigations into atrocities and missing people, when sometimes the only witness to a crime can no longer speak for themselves.

The truth is never buried

Decomposition starts almost immediately after death, with the end of normal bodily functions and the spread of internal bacteria. These processes cause the tissues of the human body to rupture and break down. Forensic pathologists use these observations to calculate the time since death. Once the soft tissues have fully decomposed, all that remains is the skeleton. The skeleton and teeth are much more robust. Although they undergo a number of subtle changes after death, they can remain intact for many years.

During a person’s lifetime, their skeleton is a dynamic living record that is altered both in its shape and chemistry by diet, the environment and daily activities. Because different teeth form at different points during childhood, and different bones in the skeleton remodel at different rates, these hard tissues essentially fossilise information about a person’s life from infancy up until the time of death. Archaeologists and anthropologists are highly skilled at unlocking this skeletal archive.

Being able to identify a body often depends on how much tissue is left behind, and what condition it’s in. But the body is a complex structure of organic and inorganic parts, and these respond differently to different burial conditions. Environmental conditions which may preserve the soft tissues really well, like an acidic peat bog, can completely destroy the hard tissues.

In places where environmental conditions can be extremely aggressive to the body, remains are still often visible. At the famous Sutton Hoo ship burial in Suffolk, the acidic soils completely destroyed the bones of those buried, but preserved the organic shapes of the bodies – like shadows in the sand.

Even burning doesn’t really destroy the body. The temperatures in modern crematoria can reach over 1,000°C, and yet the skeleton survives pretty much intact. The ashes given to loved ones are the result of a secondary process, a cremulator, which crushes the largely intact bones into “ashes”. Work from Pompeii and Herculaneum, including our own, also shows that skeletons can survive even spectacular volcanic eruptions.

Since bodies can’t be totally destroyed, attempts are often made to hide them instead. This is a common decision after politically-motivated instances of mass violence, in which people are forcibly “disappeared”. Hiding bodies is an additional, powerful layer of violence against a targeted group. It denies the identity and fate of the deceased and leaves their loved ones in a state of limbo.

Without a body, the families don’t know if their relatives are alive or dead. There can be no closure for them, only futile hope. The resulting emotional pain is often likened to a form of psychological torture. Victims of violence in Cyprus were hidden in wells, while bodies were thrown off cliffs in Bosnia. In each of these cases, the skills of forensic archaeologists and anthropologists have helped recover and identify these people.

Scientific developments are allowing information to be recovered from even the tiniest fragments and traces. DNA profiling can reveal a lost person’s identity from a milligram of powdered bone. Your sex can now be determined from the analysis of peptides – the most basic component of proteins – taken from an almost invisible etch of tooth enamel.

This is where our research really makes the difference. By developing new methods of analysis, we’ve been able to answer questions and solve mysteries that have confounded explanation for years. Ensuring that these methods are accessible and easy to use around the world could ensure more atrocities are brought to light.

To make sure these techniques aren’t just the preserve of academic researchers – and can instead help investigators on the ground – we recently launched an online course, with the support of the International Committee of the Red Cross. The treatment of the dead is always political, but thanks to new scientific approaches, the victims, and their stories, are not gone forever.

This article is republished from The Conversation under a Creative Commons license - to comment, please see the original article.