How Apollo is still revealing the Moon’s secrets 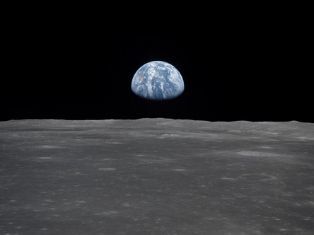 View of the Earth taken from Apollo 11. Credit: NASA.

On 20 July 1969, Neil Armstrong became the first man to walk on the Moon. Fifty years on, the lunar samples collected by Armstrong, Buzz Aldrin and subsequent Apollo astronauts still play an important part in our attempts to find out how much water exists on our near neighbour and how it reached Earth, as Dr Vincent Eke, in our Institute for Computational Cosmology, explains.

Water on Earth is crucial for the survival of humanity, and yet we have a hazy understanding of how it came to be here.

The relatively simple evolution of the Moon makes it a good laboratory for testing theories about how water reached the inner solar system.

After all, if asteroids and comets brought water to the early Earth, then some should also have reached the Moon.

Prior to the Apollo lunar programme, the bulk Moon was generally considered to be dry, because water would have been lost to space during the energetic process of lunar formation. However, there was potential that water subsequently delivered to the Moon could be trapped as ice for billions of years in permanently shaded freezing cold polar craters - a possibility first studied in detail in 1961.

Between them, the 12 Apollo astronauts to have stepped onto the Moon brought back almost 400kg of rocks from their equatorial landing sites.

Tests on these samples in the 1970s found some water, but not so much that it could be confidently said to be anything more than terrestrial contamination. It was almost 40 years later, following the development of more sensitive measurement techniques, that scientists proved the Apollo rock samples did show that traces of water were present in the lunar mantle. This implied that not all water was lost to space during the energetic Moon formation process.

These reanalyses followed the detection of hydrogen in the permanently shaded polar craters by the neutron spectrometer on board the Lunar Prospector spacecraft.

Hydrogen is the H in H2O - or water to you and me - so this finding suggested the presence of water ice. This was confirmed by NASA's Lunar Crater Observation and Sensing Satellite in 2010, which smashed into the Cabeus crater near the lunar south pole, ejecting debris into space that included a small percentage of water.

Researchers now talk about the lunar water cycle, with the latest discovery being the detection of water in the tenuous atmosphere by the Lunar Atmosphere and Dust Environment Explorer (LADEE).

The amount of water that LADEE detected correlates with the Moon passing through known meteoroid streams. These meteors heat the ground when they impact, liberating water molecules from grains at least 10cm below the lunar surface.

More detailed analysis of the isotopic composition of the water in the lunar mantle, the atmosphere and the permanently shaded craters should allow us to understand the connections between these three lunar water reservoirs and determine from where in the solar system the water originated.

After 50 years of careful curation, the lunar rocks collected by those 12 Apollo astronauts continue to shed light on the formation and evolution of the Moon.