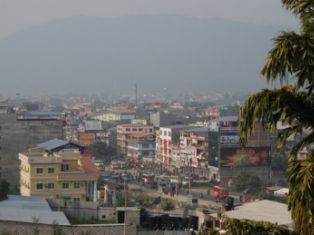 It’s been more than four years since a magnitude 7.8 earthquake devastated Nepalese cities, claiming thousands of lives. Since then, there have been thousands of aftershocks. Yet when I spoke with residents of Bharatpur – Nepal’s fourth largest city – as part of my ongoing research, beginning in 2014, I was surprised to discover they were more concerned about wild animal attacks than the prospect of another high-magnitude quake.

Understanding what people worry about is crucial to preparing for natural hazards such as earthquakes and mitigating their effects. To prevent disasters, local people, municipal authorities and national governments all need to pull in the same direction – especially when budgets are low for disaster planning. But if residents feel that their everyday fears are ignored by those in power, they may disengage, leaving authorities unable to influence their behaviour in a time of crisis.

Throughout my research into the way cities are governed, I have investigated what people worry about, how they cope, how they raise their concerns and what role local authorities play in addressing them. I have consistently found that people tend not to worry about things they cannot prevent or control. And so far, local and national governments haven’t done a good job of recognising this.

A world of worries

Residents of Bharatpur (which has a population of 300,000) did not worry about earthquakes. The fact is, their everyday experiences and relationships are difficult and filled with tension – so they’re more concerned with immediate dangers and changes than with the indistinct threat of a natural hazard.

For example, the residents I spoke to were worried about wild animals – specifically tigers and rhinos – attacking people in the forest as they gathered firewood for their homes. This is a real threat: when I visited Bharatpur in 2017, I discovered that earlier in the year there had been a deadly tiger attack in broad daylight on the same dirt road where I had interviewed participants for my PhD research in 2014/15.

Residents also worried about changes to municipal boundaries that will affect their access to government services. Administrative changes in the city have led to a reallocation of funding from rapidly urbanising areas to the rural parts of the city, which lack the most basic infrastructure (electricity and paved roads).

What’s more, the local authority is raising taxes in 2019, which leaves those with very little money struggling to pay for services that were free before, on top of feeding their families and paying for school uniforms.

Yet policy makers and government officials at all levels ignore or discount residents’ fears about wild animal attacks, reallocation of municipal funding and the prospect of increasing taxes, when deciding what risks to address in their cities. Local authorities are more focused on paving roads throughout the city – a visible improvement which shows they are “doing something” – rather than addressing the full continuum of urban risk.

It’s important to note that there is nothing natural about disasters. Natural hazards such as earthquakes, tsunamis and volcanic eruptions happen frequently around the world. But disasters only occur when people are left exposed and vulnerable to natural hazards – which should be mitigated through safer building, better planning and preparation.

By ignoring residents’ everyday fears, governments risk losing their trust, which could increase the risk of disaster as residents disengage from government initiatives aimed at mitigating natural hazards.

In a new paper, due to be published as part of the 2019 United Nations’ global assessment report for disaster risk reduction, I explain why it’s crucial to listen and include the views of residents and local authorities when national governments, donors and United Nations agencies think about how to manage risk in cities.

Local authorities are on the front line and are increasingly responsible for managing the full range of urban risks and hazards – from the economic precarity that forces young Nepali men to work abroad, to environmental degradation including lack of sewage treatment and rapid urbanisation which leads to fertile agricultural land being built on. And the list continues.

Recognising this wider range of risks is important for global conversations taking place between national governments and United Nations organisations. How these leaders define risk can decide how governments act on an international, national and even municipal level.

What’s more, if local people’s perceptions of risk are not included in national policy decisions, this shapes and actually limits what risks are actually managed locally. This leads to people’s worries being left ignored and unaddressed – and they become disenchanted and disengaged.

According to the United Nations, we are now living in an urban world, so we should all make the effort to better understand the complexity of challenges facing cities, and the continuum of risks in Nepal and all the other fast-urbanising places in the world. This includes listening to cities’ residents.