Fracking can cause earthquakes tens of kilometres away suggests new research 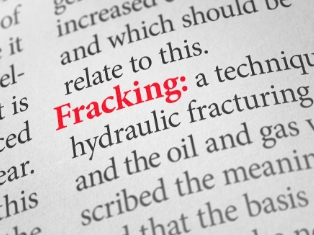 Professor Gillian Foulger (Earth Sciences) believes that earthquakes threaten to be a showstopper for fracking, and a critical problem for cleaner energy solutions too.

In the Netherlands, the largest gas field in Europe will be shut down by 2030 after sustained damage to homes from earthquakes became too severe. In Oklahoma, US officials have severely curtailed operations after injection of waste water underground caused several earthquakes above magnitude five – one nearly 180,000 times stronger than the 2.3 magnitude earthquake that brought a seven-year pause on fracking in the UK.

While operations have since resumed in Britain, the practice still remains a political battleground, with earthquakes at the centre. The UK government’s fracking commissioner, Natascha Engel, recently resigned, claiming that an [unreasonably low] magnitude 0.5 threshold for tolerated earthquakes amounted, in effect, to a ban on fracking.

Residents, on the other hand, largely oppose fracking near their homes. Fears of damage to property and the well itself at a fracking location in Lancashire, in the north of England, notably lowered house prices in the area.

In the absence of a known mechanism by which fracking could cause earthquakes more than a mile or two from drilling sites, operators have often denied responsibility for such quakes. However, new research has now linked distant earthquakes to fracking, providing evidence that much larger areas surrounding sites may be at risk from drilling operations than previously demonstrated. This is a critical problem not only for fracking, but for cleaner energy solutions too.

Fracking involves injecting a high-pressure mixture of water, sand, and chemicals into shale layers to create fractures, opening pathways along which trapped gas in the shale can be extracted. Once this waste water has served its purpose, it can be reused for fracking injections at another site. By design, the breaking of rock that inevitably accompanies both waste water disposal and fracking produces small, usually imperceptible earthquakes.

Occasionally though, the injection of fracking fluid or waste water can cause movements in natural pre-existing geological faults – large cracks that already exist in the rock. This can trigger the release of loaded energy stored in the fault, in much the same way a skier can trigger the release of an avalanche. If sufficiently severe, the resulting earthquake can cause damage to houses, threatening local communities. 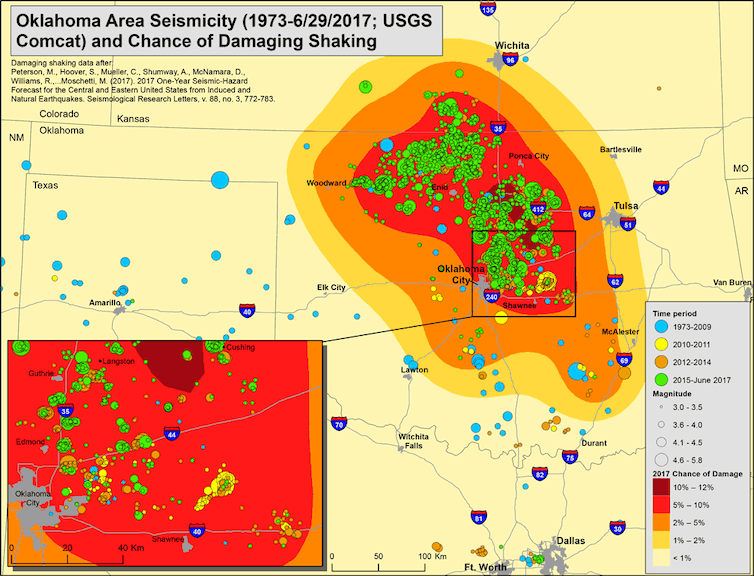 Property damage risk from hundreds of earthquakes above magnitude 3 in a large area of Oklahoma. US Geological Survey/Wikimedia Commons

Some of these earthquakes occur very near the fracking site itself, but others have been reported as far as 50 kilometres away, making it difficult to guarantee the safety of surrounding areas.

The new study, published in Science, takes a significant step forward in understanding this phenomenon. Experimenting in shallow geological faults, the researchers found that pumping water into these areas caused the rock along the fault lines to slowly slip. These “silent” movements didn’t produce earthquakes at the initial point of slippage, but gradually increased the pressure on more distant parts of the faults, inducing earthquakes much further away from the borehole than the injected fluid could reach.

The research shows that by this mechanism, fracking can induce earthquakes tens of kilometres away. In Oklahoma, where fracking is an established practice, millions are at risk from property damage.

This, of course, is not good news – but the first step in assessing whether a problem can be solved is understanding it. Setting the wider debate over the legitimacy of fracking to one side, the results are an important step forward in determining whether the key safety concern with fracking can be resolved.

For example, we may soon be able to make accurate calculations of the extent of vulnerable areas, and the timescales on which earthquakes could occur. Being able to provide reliable information to residents and authorities would tackle the unknown in what is often an emotionally charged debate, and allow all involved to make an informed decision on whether fracking should be allowed.

It’s important to note that the problem of induced earthquakes is not just reserved to fracking. Several potential sources of clean energy and carbon dioxide removal technologies are also prone to inducing earthquakes. For example, most geothermal power stations re-inject the hot water extracted for electricity generation back into the ground to prevent reservoirs from running dry. Dry rock geothermal power stations also inject high-pressure water into deep wells to extract heat from fractured rock near the Earth’s core, causing earthquakes in a similar way to fracking. 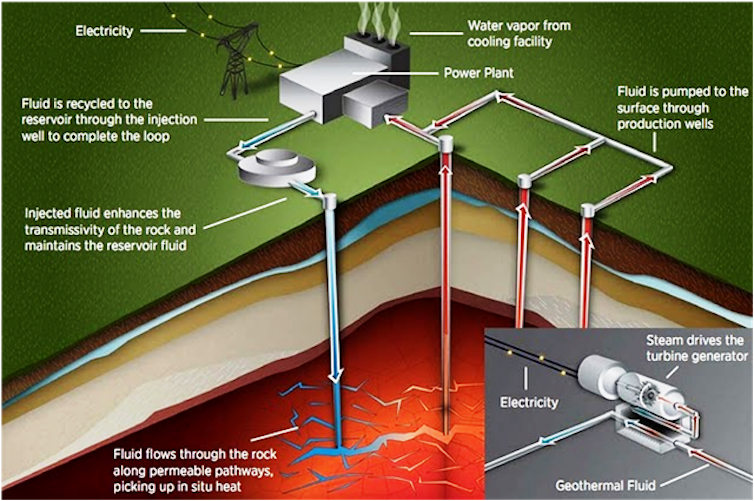 Underground storage of captured carbon dioxide – likely to be key in supporting the transition towards clean energy – can also induce earthquakes. An earthquake-induced rupture of an artificial carbon dioxide reservoir would nullify costly efforts to keep the gas out of the atmosphere, as well as posing health risks to local residents – so understanding how to manage such risks is imperative in the development of such technology.

Much work is still required, and it’s not yet certain whether there is a way to stop underground fluid injections from causing earthquakes. But at the very least, we are one step closer to finding out.