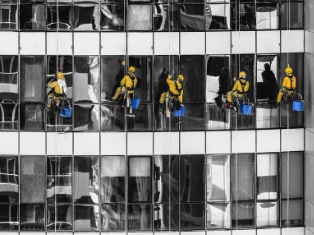 Dr Jo McBride (Business School) and Dr Andrew Smith (University of Bradford) discuss the issue of low paid workers who have to do multiple jobs just to get by.

The UK is experiencing record levels of employment, with over 32m people in work. But many workers and their families continue to struggle to survive financially – it’s estimated 5.5m workers are paid below the Real Living Wage, which is set at a level at which people can afford to “live”, based on the minimum income standard.

But what’s missing from these statistics are those people who have to work in more than one low paid job to make ends meet. This is the focus of our research – which has never been conducted in the UK before.

We interviewed 50 low paid workers in multiple forms of employment in the regions of Yorkshire and North-East England. We expected to speak to workers with two or three jobs, but were surprised and alarmed to find a number with four, five, six and even seven different jobs.

All of the workers we spoke to had multiple jobs as they were struggling to make a living, and some made use of food banks. Ages ranged from late-teens to 60s and education levels varied: a minority had no qualifications, but many had NVQs, GCSEs, O-levels, A-levels, good quality degrees and even masters degrees.

The workers we interviewed were employed in cleaning, catering, the entertainment sector, the care sector, bar work, security, DIY, social services, public services, libraries, education, retail, administration, accountancy and IT services. These occupations spanned the private, public and third sectors, but a number of public sector jobs had been outsourced to private contractors due to austerity cuts.

In terms of employment contracts, there was a combination of full-time, part-time, agency, temporary, seasonal, term-time only, casual and zero hours.

We believe the rise of multiple jobs is due to the creation of a deregulated “flexible” labour market. Recent research by the Joseph Rowntree Foundation highlighted the expansion of insecure work. The TUC, which comprises the majority of the UK’s major trade unions, has also reported that only one in 40 jobs created since the recession is full-time.

The workers we interviewed had to acquire additional jobs as a result of low wages, limited working hours, under-employment and job insecurity. Additional factors include the proliferation of part-time, zero hours contracts and temporary and casual contracts. Many of the people we spoke to were experiencing job insecurity and instability, and having to work for employment agencies.

The workers we spoke to were also acutely aware of these issues and the associated challenges of insufficient wages and hours in order to make ends meet – as Anna, who works four jobs (two cleaning, one in catering, and one as a shop worker), explained:

The changing world of work has thrown up a range of challenges and the voices of these forgotten workers can no longer be ignored. These workers are not in this position out of choice. These were the only jobs available – leading them to have to take on more than one job due to low wages, limited working hours and opportunities.

Our research affirms the necessity for the adoption of the Real Living Wage. This is set at £9/hour, (£10.55 in London), whereas the National Minimum Wage (£7.38/hour) and National Living Wage (£7.83/hour) are set at a lower level. Indeed, some workers we spoke to who received a National Living Wage pay rise had their hours cut by their employer to compensate for the rise, so they actually ended up worse off.

Along with a recommendation for more effective wage regulation, there also needs to be stronger regulation of working time arrangements with guaranteed hours. Many of the workers we spoke to worked zero hours or highly variable short hours contracts. These recommendations are important because it is very clear that more people need access to secure jobs with decent working hours and opportunities for progression, if this situation is to be improved.