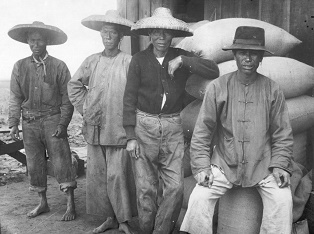 Dr Kevin Waite, from our Department of History, reveals why the State of California refused to ratify the 14th Amendment and why it once pioneered racist immigration exclusion laws.

When it became law 150 years ago in July 1868, the 14th Amendment was as controversial as it was transformative. Overnight, the amendment turned 4 million former slaves into citizens and, just as quickly, drew howls of protest from their old masters in the Southern states, who made opposition to the new law part of a broader campaign against the federal government. Resistance to the amendment also came from a seemingly unlikely source at the far end of the continent.

California was the only former free state to refuse to ratify the amendment in the 1860s. Although three northern states later rescinded their ratifications, California lawmakers simply stonewalled the measure during the Reconstruction era. It would take until 1959 before California’s legislators ratified the 14th Amendment.

Why would a state with a relatively small black population so vigorously oppose this landmark civil rights law?

The answer lies in California’s record of xenophobia and the power of white supremacy in American politics. As we’re rediscovering today, tribalism is easily exploited for political gain while the path to racial justice rarely follows a straight line.

Those Democrats had stormed back to power in 1867 on a platform of white racial superiority and resistance to the federal government. They were especially critical of Radical Republicans in Congress, who had recently placed the former Confederate states under military rule and granted the vote to African American men within those states.

Xenophobia had become bipartisan orthodoxy in California by the 1870s

Although black men would not win the right to vote in states outside the former Confederacy until the passage of the 15th Amendment in 1870, California’s politicians could see the writing on the wall. They therefore pledged their defiance to any measures that would “end in the degradation of the white race and speedy destruction of the government.”

In his 1867 inaugural address, Governor Henry Haight heaped scorn on federal Reconstruction and its racial-levelling measures. White Southerners had been stripped of their Constitutional rights and subjected to military despotism, he claimed, which devolved “political control to a mass of negroes just emancipated and almost as ignorant of political duties as the beasts of the field.” It was rhetoric like this that carried Haight’s party to a 4-to-1 legislative majority by 1869.

According to California’s ruling elite, threats to white supremacy came in many shades of brown — African Americans, Native Americans, Latinos and Chinese immigrants. But it was the Chinese, constituting roughly 10% of the state’s population, who presented a particular supposed danger. And although the 14th Amendment granted citizenship only to those naturalized or born on American shores, it extended fundamental protections for life, liberty and property to “any person,” including Chinese born elsewhere. The law was therefore expansive enough to upset the existing racial order.

Predictably, when the 15th Amendment — which granted the right to vote to all male citizens, regardless of skin colour or “previous condition of servitude” — came to the states for ratification in 1869, California’s lawmakers resoundingly rejected it.

In the same period, private citizens across the state waged their own campaigns against non-white residents. Beginning in the late 1860s, California’s newspapers began reporting on attacks against Chinese workers and Chinese churches by self-proclaimed members of the Klu Klux Klan. This western iteration of the Klan lacked the organizational structure and size of its infamous Southern counterpart. But through violent terror, it achieved a similar end: the reinforcement of white rule.

The bloodiest attack on Chinese life — albeit one with no connection to any western Klansmen — took place in Los Angeles in 1871, when a frenzied mob massacred 18 immigrants. Of the 500 rioters, only eight were convicted of manslaughter, all of whom would be released from San Quentin a year later.

Such attacks only confirmed the lessons learned from earlier electoral campaigns: Chinese life was cheap and race-baiting would pay political dividends. In fact, xenophobia had become bipartisan orthodoxy in California by the 1870s.

Even the state’s Republican Party — which had celebrated the “universal brotherhood of man” in the disastrous 1867 campaign — now embraced the politics of Sinophobia. California’s Republicans spearheaded the Chinese Exclusion Act of 1882, which barred virtually all immigration from China. It was the first American law to ban a specific ethnic group from entering the United States.

By this time, many of the protections offered by the 14th Amendment to non-white citizens had been stripped away by judicial rulings and greatly diminished federal enforcement. With help from their political allies across the country, California’s leaders had thus made good on repeated promises to preserve white supremacy.

What historian Eric Foner has called “a stunning and unprecedented experiment in interracial democracy,” begun during the Reconstruction era, had to be deferred until the civil rights movement almost a century later. It was during this movement that California finally ratified the 14th Amendment, a belated mea culpa for the state’s role in blunting the reach of Reconstruction and its racially progressive policies.

In a strange twist, California’s lawmakers are once again preaching resistance to the federal government. Yet this is a resistance of a very different sort, one that shields and even welcomes additional immigrants.

Many would like to think that this is the blueprint for the American future — open, pluralistic and progressive. If experience is any guide, however, that blueprint will continue to inspire substantial opposition and may result in further electoral defeats. For the last century and a half, one law of American political life has remained relatively constant: It’s easier to erect barriers than to break them down.

Originally published in The LA Times.