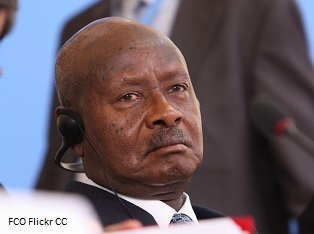 Now that President Yoweri Museveni has been given the legal go-ahead to run for the presidency again, what does this mean for Ugandan politics? Professor Justin Willis from Durham History and Gabrielle Lynch from University of Warwick explain.

Uganda’s Constitutional Court has removed the constitutional age-limit for presidential candidacy. It was previously 75. As a result, President Yoweri Museveni – who has been in office since 1986 and is 73 years old – can now vie for another term. The judges’ argument, in a majority ruling, was that the electorate could still decide whether or not to vote for Museveni. Because they had a choice, the judges argued, their fundamental rights were not infringed by the change.

Museveni’s response to this apparent victory might seem a little ungracious for a man who had apparently just been handed a significant victory: in a speech shortly after the ruling, he complained that

"our judges in Uganda spend more time on form and not on substance."

Museveni’s annoyance arose from a second element to the judges’ ruling. The age-limit act had been amended as it passed through parliament to extend both the presidential term, and the life of parliament, from five to seven years. The judges struck this change down. This means that Uganda’s next elections will be held in 2021, rather than in 2023 as Museveni had hoped.

Why did Museveni object? Because, he said, such a “short” period in office means that

"a lot of time is spent on electioneering and less time on development."

What he did not say is that elections cost a great deal of money – a concern for him and, even more so, for the members of parliament (MPs) of his National Resistance Movement who were behind the attempt to extend the period between elections.

Museveni has managed to remain in office through elections that have been widely condemned as unfair by international and domestic observers. His long grip on power has rested partly on the memory, and the practice of violence. The security forces have repeatedly used extreme force and intimidation, most notably against his most dogged opponent Kizza Besigye, in a series of elections since 2001.

Elections have provided Museveni with an opportunity to remind Ugandans of the threat of instability, and to show the state’s capacity for violence. But at the same time they have provided an arena for an expensive politics of reward and promise.

Together, these strategies have ensured that the playing field has been heavily skewed in his favour. This itself may not be seen as a problem by the president. He has long viewed multiparty elections as divisive and as a potential source of “poor leadership”. But the cost of the campaigns may seem more of a problem to him - and the MPs of the ruling party. Which is why they would like an extension to their term in office.

The cost of running elections isn’t solely in terms of the cost to the treasury of the organisation of the actual voting – though that is significant. What matters more to the MPs is the cost of campaigning, with money being spent on everything from posters to t-shirts and radio adverts.

There is also an expectation that those who run for office will engage in almost ceaseless displays of generosity.

A candidate, or someone who is thinking of being a candidate, will receive constant invitations to attend fundraising events, or meet with local self-help groups. At every such event they must give a token, often in cash form, and promise more rewards in the future. They will be on the guest list for every local funeral; they will be asked for help by constituents whose relatives are ill or who are unable to pay school fees.

National Resistance Movement candidates often receive help from their party or president for these campaigns and the incumbent’s access to state resources is one of the many ways in which Ugandan elections are skewed against the opposition. But it seems that parliamentary candidates for the NRM also have to rely heavily on their own resources.

We shouldn’t feel too sorry for them; they willingly play this game, though they complain of the cost.

In turn, the demands of voters arise from bitter experience. Development is the key word in African politics: all politicians claim that they will bring it. But most voters feel that they and their neighbours remain poor and that those whom they elect never deliver the prosperity or services that they hope for. The election campaign is the chance to demand instant rewards and to test candidates’ generosity: just for a little while voters have the politicians at their mercy.

In neighbouring Kenya, too, candidates for election are expected to display their generosity: giving cash or other gifts can be seen as a way of signalling virtue, of showing commitment to the community. As a result, politics in Kenya sometimes seems like a never-ending campaign season of fundraisers and funeral donations.

Even Ghana – where largely peaceful elections lead to changes in government on a regular basis – running for elected office can be an expensive business for individuals. But in Uganda this sort of electoral clientelism – as some call it – has become part of the president’s repertoire of techniques for staying in power.

Extending presidential and parliamentary terms was a way to reduce the cost of this technique; for now, the judges have thwarted that plan, at least. But this may not be over: Museveni has suggested that the constitution may yet be changed, “judges or no judges”.