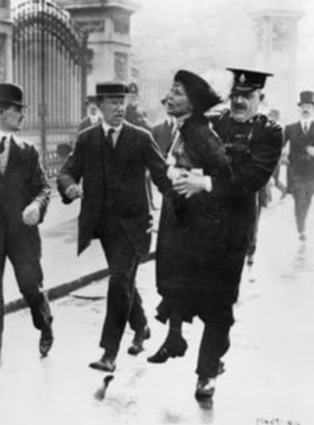 Most people know about the famous examples of suffragette activity, such as window breaking and street demonstrations. By contrast, petitions show a different side of the campaign: the patient, behind the scenes activity that helped deliver votes for women.

The suffrage campaign was, itself, founded by a petition signed by over 1,500 women, including leading activists Barbara Bodichon and Emily Davies. This was presented to the House of Commons by the liberal philosopher John Stuart Mill on June 7 1866.

As the right to vote was linked to property, the petition claimed that propertied women had a right to the franchise. Though a limited demand that did not include married women (who could not own property at this time), the petition provided a rallying point for a new movement.

While women (and the majority of men) could not vote at this time, all British subjects had the right to petition. Petitioning was one of the few political rights women possessed and had proved an effective strategy in earlier campaigns. Women had been active both as petitioners and canvassers who collected signatures in the movement for the abolition of slavery, for example. So when suffrage bills were debated in parliament in the 1870s and 1880s, the National Society for Women’s Suffrage encouraged petitions in support.

Petitions were a good way of raising public awareness, getting media coverage and keeping suffrage on the political agenda. For example, in the 1890s, campaigners organised a “special appeal” for the vote, signed by 257,000 women. This was one of the largest petitions of the 19th century. The appeal was displayed to MPs in a special exhibition in May 1896.

At the January 1910 general election, suffragists organised petitions from male voters in many constituencies. This was an attempt to use petitions to hold an unofficial referendum on women’s suffrage. During the 1913 “pilgrimage”, which saw women gradually descend on London after starting from different locations, pilgrims sent petitions along their way.

The groups fighting for women’s suffrage did not, however, see eye to eye on the role petitions should play. Suffragette leaders Emmeline and Christabel Pankhurst believed that petitioning a parliament of men was a waste of time. The failure of traditional constitutional tactics showed that new, militant methods of campaigning were necessary.

But suffragettes never entirely abandoned petitioning. In May 1914 Emmeline Pankhurst was arrested on her way to presenting a petition to the king, generating one of the iconic suffrage images

At a time when women were excluded from parliament and voting, petitions were a way to directly engage with male politicians. For Irish suffragists, petitioning allowed them to challenge the British Parliament as well as supporting the wider campaign. Women asserted their right to citizenship through petitions, while petitioning demonstrated their capacity for political participation.

Many of the petitions called for the right to vote to be extended to women on the same terms “as it is, or may be” given to men. But suffrage petitions addressed other issues too. For example, the 1902 petition signed by women undergraduates argued that the vote was the only way to ensure the equal educational status of women.

In response to anti-suffragist claims that women didn’t want the vote, petitions showed that there was in fact popular support for suffrage. They came from men and women and became a way to organise and mobilise a broad, diverse, popular coalition for women’s suffrage. Petitions came from all over the UK and from different types of people, such as women university students in 1902, or women farmers in 1883. Getting people to sign petitions was a first step to recruiting them as active members of the movement. Suffragists preferred to work at local level, gradually spreading their message through the process of gathering signatures.

But as the history of suffrage petitioning shows us, focusing on the lack of immediate results misses the point of petitioning. The majority of petitions throughout history have been unsuccessful. Petitioning has remained a popular form of political activity because of the numerous advantages it has, even if authorities reject or ignore the demands of petitioners. Petitions keep a topic on the political agenda even when politicians would rather avoid the issue. Petitioning raises public awareness and attracts media coverage. Petitions identify support and channel it behind a national campaign, and can act as a first step for further activity on an issue.

The suffrage movement also suggests that petitioning is most effective when it is embedded within, rather than divorced from, other forms of political activity, such as such as public meetings, demonstrations, or elections.