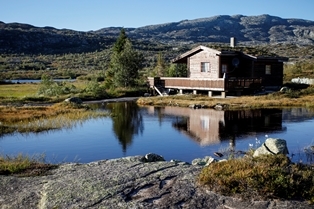 Mountain cabins and seaside houses are part of the Scandinavian dream. Europeans are right to envy their Nordic compatriots, who can gather with family and friends at a simple house for hiking, skiing, mushrooming, or just relaxing in front of a magnificent landscape.

About half of all Norwegians have access to a summer house of some kind. The first boom in cabin ownership was in the 1960s, when intrepid Norwegians hiked into the mountains to build themselves a little hideaway. Another boom in the 2000s saw increasingly sophisticated summer houses coming onto the market in many upland areas.

At this time of year, many Norwegians have already closed up their summer cabins and are back at work, perhaps already looking forward to autumn half-term holidays at the end of September.

For some of them though, the future of their cabin might be a little less straightforward than organising a shared calendar. As the first generation of owners leave cabins to their descendants, they often face difficult decisions.

The main principle of Norwegian inheritance law is “partible inheritance”. This means that at least two thirds of a couple’s goods are expected to be divided equally between their children.

When it comes to a family home, inheritors who are already homeowners most commonly sell the house and share the proceeds, but the same does not necessarily apply to a cabin. Cabins are much more likely to stay in the family and be shared in different ways.

One way that cabins can be shared is to split the ownership equally between siblings. This appears straightforward in principle, but if this happens over two or three generations, there may be so many owners that it becomes impossible to manage.

As shares in the cabin move through the different branches of the family, and are split between various siblings, people can end up with 3/72 or 18/60 of a cabin, making ownership complex.

A popular option is to give ownership of the cabin to one child (or inheritor) and grant user rights to the others. To avoid disputes, many people add a clause to their will so that the owning inheritor cannot sell the cabin without giving the others the option of buying it first.

However, things can get even more complicated. Until the Norwegian government recently abolished inheritance tax, many couples would arrange to sell their cabins to their offspring in advance, still retaining usage rights themselves for up to four weeks a year.

There were good tax reasons to do this, which have now disappeared, but there are still good moral reasons behind the practice.

Despite attempts to keep the peace, things do go awry. Summer houses on the coast have become particularly valuable properties, because of the restricted areas where they may be built (despite the long coast, there are limits to coastal building).

Inheritance tax often priced inheritors out of taking on a cabin that may have been built 40 years ago for next to nothing, but is now a multi-million pound property. That problem has now disappeared.

However, issues still exist and there are good reasons why Norwegians often talk about stress and sadness in relation to cabins. “Everyone has a cabin story,” I am often told.

For example, say three siblings inherit a cabin equally and one wants out of the share, that then leaves the other two with a major bill to buy he or she out. This can often cause tension within the whole family.

There are many “blended” families in Norway due to exceptionally high divorce and remarriage rates. However, this doesn’t necessarily make things more complicated, as inheritance can go to direct heirs rather than step-children.

When marrying, couples can retain property in their personal ownership, not necessarily bringing everything into joint ownership with their new spouse.

For example, if “Britta” owns a cabin that her parents built, she does not have to leave it to her new husband’s children from his previous marriage.

These days, so many families have cabins that there may be several to pass on. Each child might get a different one, and any significant difference in value might be compensated through a cash settlement.

By default however, this can also reinforce the difference between “legal” siblings (including birth and adopted siblings) and step-siblings, often quite subconsciously.

Sharing a cabin doesn’t only bring a family together in the holidays, but it can also define what relations the different family members have with each other.

Perhaps surprisingly then, given the heightened emotions associated with a family cabin, startlingly few inheritance disputes end up in court.

The abolition of inheritance tax has been seen as a potential threat to the “Equal Society” that the Norwegian welfare state has produced. But whether these changes will have an effect on the method of shared ownership and use of holiday cabins, remains to be seen.

It is quite likely that Norwegian families will continue to create equality – at least within the family – through sharing-arrangements at cabins. Whether equality can survive beyond the family is a different question.