Philosophy for children boosts their progress at school 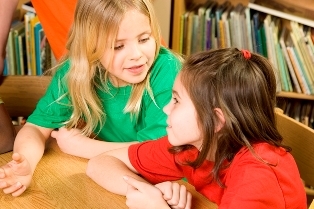 A programme to teach young children the basics of philosophical thinking in UK schools has been shown to help them progress in maths and reading. A new study evaluated the use of the Philosophy for Children (P4C) programme in which primary school children are guided through discussions of questions such as “Should a healthy heart be donated to a person who has not looked after themselves?” or “Is it acceptable for people to wear their religious symbols at work places?” The programme is intended to help children become more willing and able to question, reason, construct arguments and collaborate.

A randomised controlled trial in 48 primary schools compared more than 1,500 pupils who took philosophy lessons over the course of a year with a further 1,500 who didn’t, but then took the lessons the following year. The children who had the philosophy lessons first improved their maths and reading by around an extra two months' of progress compared to those children who weren’t taking part. And the poorest children made the most progress of all.

The scheme appeared to cost less than £30 per pupil, making it a possible use for the pupil premium funding provided to those schools for children eligible for free school meals because of their parents' low income.

P4C was delivered by the Society for the Advancement of Philosophical Enquiry and Reflection in Education (SAPERE) and is currently in use in about 3,000 UK primary and secondary schools. SAPERE recruited the schools for the trial, provided training for the teaching staff in half of the schools and provided on-going backup and support.

Throughout the sessions, children were introduced to a vocabulary for reasoning to help develop their skills and their understanding of concepts. They discussed which kinds of questions they could simply look up the answers to, and which kinds they might make progress with through argument.

In a typical lesson, the teacher showed the pupils a video clip, image or newspaper article with a philosophical dimension, to stimulate their interest. For example, on one occasion we observed, they read a short story about a child trying to keep a whale as a pet in their bath. This was generally followed by a short period of silent thinking time, before the class split into small groups to generate questions that interested them around the topic.

Questions with philosophical potential are also chosen by the group of eight to ten-year-olds to get the whole class talking. The lessons we observed also included the questions: “Why do men receive more sponsorship than women in tennis?”, “Is it OK to deprive someone of their freedom?” and “Can you and should you stop free thought?”

The pupils and teacher sat in a circle all facing each other. The main rules for participation are to listen to each other carefully and wait for your turn to speak. During the training, teachers were introduced to innovative strategies that could be used to encourage children’s participation in the discussions. The emphasis is to make each session an opportunity for children to think, question, discuss and debate in a group. Some schools only did one such philosophy session per week with each class during literacy or religious education lessons, and others embedded it more fully into the life of the school.

Our independent team at Durham University was appointed by the Education Endowment Foundation charity to monitor the impact of the intervention. The children in both groups were assessed at the outset and at the end using a cognitive abilities test, and their results for reading, writing and maths in the early and later part of primary school were compared.

The gain in reading for the pupils on the programme, compared to the pupils who had to wait a year before starting it, was around two months of extra progress. There was even some evidence of greater improvement in reasoning skills, with about one month’s extra progress for those children who did the philosophy programme. For both reading and reasoning, the results were more pronounced for those children eligible for free school meals.

None of the relative gains is very large, and the trial ought to be repeated to check that the results are secure. However, no negative effects were noted, and the small gains came at a relatively low cost.

Feedback from teachers throughout the trial suggests that the philosophy sessions created an opportunity to engage with pupils and develop a whole school culture of thinking, listening, speaking and using logical arguments. They claimed it also had a beneficial impact on wider outcomes such as confidence, patience and self-esteem. It is important that all children have a chance to participate, and that even the simplest contribution is treated as useful.

This kind of philosophy lesson may also be worth doing for its own sake, and have longer-term benefits to children, not assessed by traditional tests at the end of primary school. An ongoing trial, funded by the Nuffield Foundation using the control schools from this study will look at potential longer-term outcomes, such as whether philosophy lessons can improve well-being, attitudes towards life, civic participation and happiness at school.

Originally published in The Conversation.