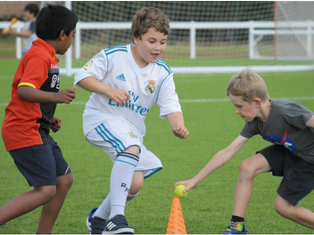 Over 500 young people aged four to 18 have enjoyed holiday camps run by Durham University this summer – and another 100 are expected for the final week of camps next week.

Young participants on the Team Durham Summer Holiday Camps 2018 have been able to choose between mini- and multi-sports camps, sport-specific programmes, adventure camps, dance and performing arts, and Learn to Row and Performance Sculling courses.

When the final week of camps ends on Friday 31 August, it is expected that 622 young people will have taken part.

The sports offered during the camps, which are held at the University’s Maiden Castle Sports Centre, have included favourites such as tennis, netball and cricket, and more niche pursuits such as fencing and archery.

Her step-father, Paul McLaughlin, said: “It’s great. They’re active and not sat around doing nothing. She’s very active and likes to be active.

“It’s tremendous what they’re doing. I take my hat off to the staff.”

This year’s summer camps have been run by 16 coaches, including Durham University students and young volunteers from the local area.

The 38 young volunteers, who between them have given 2,728 hours of their own time, have been given the opportunity to work toward and achieve a certificate in volunteering. Some have completed training courses, including in first aid.

“This year’s have been great fun, and we hope all the young people have had a great time, as well as getting some physical exercise and learning new skills.”

There will be further Team Durham holiday camps during October and February half terms, Easter and summer 2019. Information will be posted at: www.teamdurham.com/holidaycamps

Once the new facility is completed, the existing sports centre will be dramatically refurbished.

When all works are completed, in winter 2019, community use of Maiden Castle, which already engages more than 2,000 local residents each week, will more than double from the current 250 hours per week to over 500 hours per week.