What are the Durham Bishopric Halmote Court records?

Records of the manorial courts held by the Bishops of Durham, and specifically of property transactions managed by the bishop's manorial courts. The bishop's manors were spread across County Durham and in Bedlingtonshire (Northumberland), but were administered centrally from the Halmote Court office in Durham city. Property that was managed by a manorial court was known as 'copyhold' (because the title deeds were a copy of the manorial court roll), and the chief Halmote Court records of interest to family historians are the records relating to the transfer and inheritance of this copyhold property.

Where and when: geographical coverage and dates

The Bishops of Durham held lands in Northumberland, County Durham and Yorkshire, and some property in London, but not all were held by manorial tenure (copyhold). The chief manors within which copyhold properties were held are as follows (showing the division into wards within County Durham), but note that the Bishops of Durham did not own all land within these areas, and some of the land they did own was held by leases and not from the manorial court.

Most records date from the early 16th century. Manorial tenure was abolished by the Law of Property Act 1925, which gradually converted remaining copyhold tenure into freehold.

What family history information will I find within the Bishopric Halmote Court records?

The records of copyhold are valuable for family historians because every transaction involving these properties (including inheritance following a copyholder's death) had to be recorded within the manorial court. The court records include details of the family relationships involved. For instance, the entry in the image below (beginning To this court came, marked with a cross in the left margin) relates to the inheritance of property in Darlington in the 1650s, and names 8 members of the Simpson, Oswold, Comyn and Johnson families, following the death of Henry Oswold. 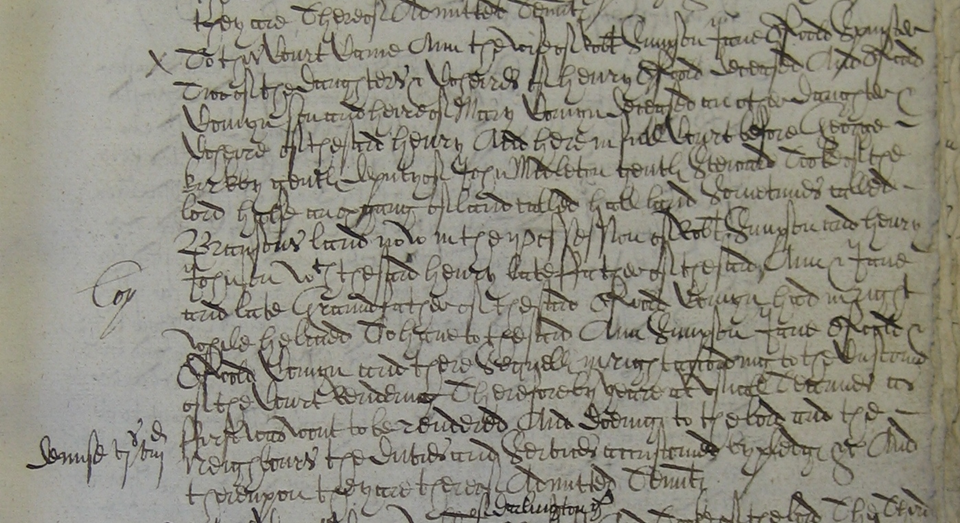 Where is the catalogue and does it include names?

The list of Durham Bishopric Halmote Court Records is in multiple sections, not all of which are useful for family historians. The most useful series of records for tracing families are the court books, which include the full text of copyhold transactions within the manorial courts. These can be found within the Catalogue of Court and Miscellaneous Books (references DHC 1/I-III). The catalogue does not include any names, but contemporary indexes are available as follows:

All the Court and Alphabet books have been microfilmed, and digital images derived from the microfilms are available online at the familysearch website. Each microfilm covers several volumes: links to the relevant collection of digital images and an indication of the microfilm item number (which is needed to locate the images for a specific court or alphabet book) are currently (late 2019/early 2020) being added into the above catalogue.

When using the images on familysearch, note:

Information about copyhold (manorial) land, and specifically on the most common documents to be found within the court books of use for family historians (Admissions and Surrenders, with transcribed and translated examples), is available at the University of Nottingham Research Guidance website. Further guidance on manorial records generally, with a short bibliography for further reading, is available as a National Archives Research Guide.

Some other records relating to the estates of the Bishops of Durham are included within the Durham Bishopric Halmote Court Records, but in general most other financial and administrative records for the Bishopric estates, and most records relating to leasehold properties, are within the related Church Commission deposit of of Durham palatinate and bishopric records. Distinguish also collections relating to different estates or other roles of the bishops of Durham, viz: