What guild records are available?

Records relating to the trade guilds or companies operating within Durham City and to the freemen (members) of those guilds. The guilds regulated trade within the city, with only the members of the guilds (who were also freemen of the city) being allowed to trade on market days without payment, and effectively exercising a monopoly over their specific trade. Each guild was historically linked with a specific trade (barbers, joiners, masons, mercers etc). Eight guilds survive (chiefly as a route to admission into the Freemen of the city, who retain certain privileges and property), but the link between members of a guild and involvement in the trade indicated has long since been broken.

Where and when: geographical coverage and dates

The city guild records relate solely to trade guilds working within the city of Durham, from the 16th to 20th centuries.

What family history information will I find within guild records?

Members of the guilds were admitted (as freemen) by one of three routes:

Records of freemen who were admitted by the first two routes (Patrimony and Servitude) are particularly useful for family historians, as they may name parents or masters and details of their trade or apprenticeship, so including both family and background information. Note that all freemen were male until 2012, when women could be admitted on equal terms. 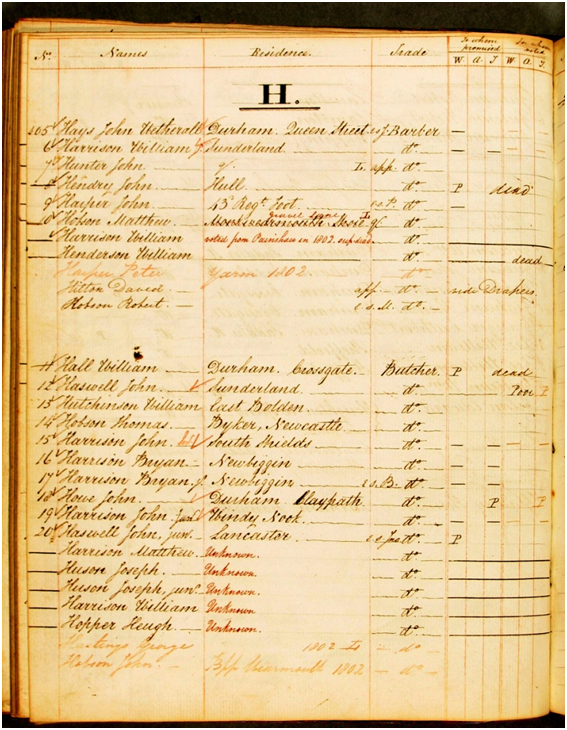 An election agent's book for the Durham 1818 parliamentary election. This lists Durham Freemen, their place of residence and guild. In the margin are columns to tabulate to whom the freeman had promised his vote, and for whom he in fact voted. DCG/10/5

Where is the catalogue and does it include names?

The catalogue of Durham City Guilds records is online. This includes the full range of guild records that survive, not just those most likely to be useful for family history research (i.e. the records of freemen's admissions and of apprenticeships). Names within the latter records are not included within the catalogue itself, but indexed separately, with details of the guild/trade concerned and names of parents or guardians where stated within the records. See the front page of each index for further guidance and the list of records which have been indexed.

No, these records have not been imaged.

Background and historical notes on the Durham City Guilds, along with a bibliography, are included at the start of the catalogue. See also the related collection of records from the Durham Freemen.