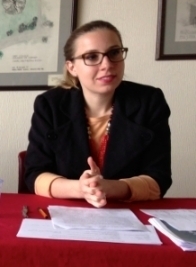 Alice joined the Durham Law School as a PhD candidate in October 2010. She holds a law degree from the University of Turin, Italy, and an LLM from SOAS, University of London, where she focused on Public International Law, Law and Society in the Middle East, Human Rights and Islamic Law.

In 2014 she is serving as a UN Fellow in Jerusalem, working on human rights and justice sector.

Before returning to academia, Alice completed a traineeship on international peace and security issues at the Delegation of the European Commission to the UN and a legal research internship at the International Centre for the Legal Protection of Human Rights (Interights). She has also worked for the International Training Centre of the International Labour Organisation as a research and training assistant.

As a Ustinov College Scholar, Alice was Project Leader for the Ustinov Café Politique, a successful series of interdisciplinary seminars to provide a forum for discussion of politics and current affairs.

In her doctoral thesis, Alice is exploring transitional justice mechanisms in Islamic contexts.