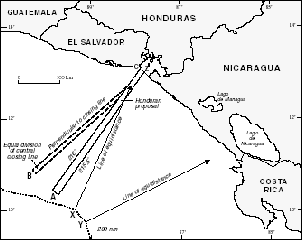 This innovative Briefing is the first of a two-part series to consider boundaries that remain to be delimited in the region around the world's largest body of water, the Pacific Ocean. The first review looks at the 42 undelimited boundaries within the Pacific Ocean proper, from the west coast of the Americas, through the mid-ocean archipelagos to Australia. The range of boundary situations addressed in the Briefing varies from the more or less compact groups of islands in the central and southern Ocean to the adjacent states on the west coast of central America lacking offshore islands.

The analysis of each undelimited bilateral boundary begins with a short introduction that notes the status of each country and the types of marine regimes, such as territorial waters and exclusive economic zones, that might eventually be separated by a delimited boundary. The second section defines the line of equidistance related to all appropriate base-points located on the mainland or islands. The final section explores the possibility that circumstances might persuade one or both countries to argue that the line of equidistance would create an inequitable maritime boundary.

Notable disputes which are considered include the Canada-USA disagreements in the Dixon Entrance and Juan de Fuca Strait, and maritime claims around Tonga.

Note: See also Maritime Briefing Vol. 3 No. 1 for information concerning the undelimited maritime boundaries in the Asian Rim of the Pacific.