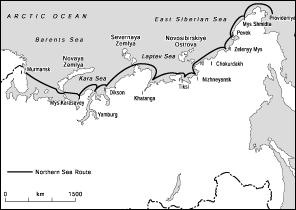 With Russia seeking to develop the Northern Sea Route and open it to international commercial shipping, this timely study explores the effect that such an action would have on the legal status of the Northeast Passage straits along the route. The recent increase in Russian hydrocarbon production could make the Northern Sea Route a vital transport link for oil and gas destined for North America.

From the Barents Sea, through the Kara, Laptev and Siberian Seas on to the Pacific, this study provides detailed analysis of the specific straits and islands affected by the Northern Sea Route. It also examines the new regime of international straits and transit rights defined in the 1982 United Nations Convention on the Law of the Sea, both in a general sense, and specifically as they apply to the Russian Arctic. In addition, this Briefing takes a look at Soviet and Russian jurisdictional policies towards the Arctic region.