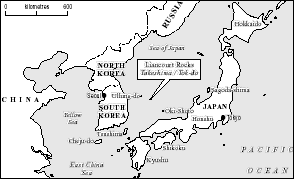 Concluding Dr Lee's survey of island sovereignty disputes in East Asia, this Briefing provides a detailed historical and legal analysis of the dispute over a cluster of tiny islands which lie midway between the Korean and Japanese mainlands. Variously called Liancourt Rocks, Tokdo (in Korea) and Takeshima (in Japan) the islands have a potentially dramatic effect on the division of maritime space in the East Sea/Sea of Japan. In spite of their small physical size, if the Liancourt Rocks were deemed to be islands under the 1982 UN Convention on the Law of the Sea their possession could affect some 16,600 square nautical miles of maritime space between the two countries. With such high stakes involved, both Japan and Korea are keen to establish their respective claims. With in-depth research, the author critiques the legal arguments of both parties, particularly in the wake of the San Francisco Peace Treaty of 1951. This Briefing provides a unique analysis of this strategically important but little-known dispute.