Territorial Proposals for the Settlement of the War in Bosnia-Hercegovina 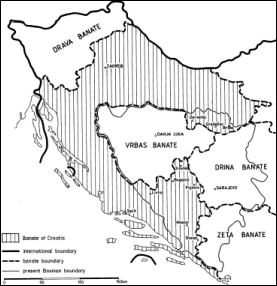 Written over the course of the first two years of the war in Bosnia-Hercegovina, this Briefing represents a unique record of the various proposals for the partition of the country put forward between the spring of 1991 and May 1994. Drawing on local sources which were largely overlooked by Western media, Mladen Klemenčić paints a vivid picture of the disintegration of the "land of hidden hatred" and the political machinations which undermined every attempt to resolve the conflict. The research is drawn from the territorial claims and proposals of the Bosnian communities (made first to one another and later to international mediators) and the proposals assembled by international organisations in search of a solution to the 'Bosnian knot'. This Briefing explores the justifications for those territorial claims and the positions taken by the international community. The study is a systematic analysis of the territorial dimensions of the struggle within the greater chaos of events in Bosnia during this critical period.

Containing thirty specially-prepared maps and detailed demographic statistics drawn from over a hundred years of population censuses, this study is essential reading for anyone who wishes to understand the tragedy of Bosnia.