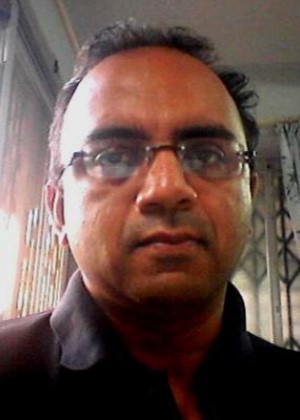 Hetu Sheth is Professor of Igneous Petrology and Volcanology in the Department of Earth Sciences, Indian Institute of Technology Bombay (IIT Bombay), Mumbai. Professor Sheth obtained his Bachelor of Science (Geology) from Mumbai University (1992) and Master of Science (Applied Geology, 1994) and Ph.D. (1998) from IIT Bombay. Between 1998-2003 he was a Post-Doctoral Fellow at the Physical Research Laboratory (Ahmedabad, India) and the Energy Research Center, National Autonomous University of Mexico (UNAM), SOEST Young Investigator (Assistant Researcher) at the School of Ocean and Earth Science and Technology, University of Hawaii, USA, and Visiting Fellow at the Homi Bhabha Centre for Science Education (Mumbai) before joining the faculty of IIT Bombay in 2003.

Professor Sheth researches volcanoes modern and ancient, and the rocks which form from them. He specializes in flood basalt volcanism, the largest volcanic phenomena on Earth and the terrestrial planets. He has intensively studied the 65 million year-old Deccan flood basalt volcanism in India, associated with a major mass extinction including the dinosaurs. He uses a wide spectrum of research approaches, involving geological mapping and field work and varied laboratory techniques, and the scale of his research ranges from studies of individual volcanoes to the large flood basalt provinces and broader issues related to the dynamics of the Earth’s interior.

Professor Sheth was Deputy Website Manager (2003-05) of www.mantleplumes.org, the popular scientific website hosted at Durham University and maintained by Professor Gillian R. Foulger. He has been a young Associate of the Indian Academy of Sciences (2003-07), and Associate Editor of the Journal of Earth System Science (Indian Academy of Sciences and Springer, 2004-07). He has published and reviewed dozens of papers, co-edited two research volumes, and authored the monograph A Photographic Atlas of Flood Basalt Volcanism (Springer, 2018). He has been awarded the Young Scientist Medal (Indian National Science Academy, 2003), the Young Investigator Award (IIT Bombay, 2007), the Krishnan Medal (Indian Geophysical Union, 2010), the National Geoscience Award (Ministry of Mines, Govt. of India, 2010), the M. R. Srinivasa Rao Award in Petrology (Geological Society of India, 2017), the PRL Award (Physical Research Laboratory, 2017), and a JSPS (Japan Society for the Promotion of Science) Invitational Fellowship for Research (Meiji University, 2018).

During the IAS Fellowship, Professor Sheth hopes to experience first-hand the physical geology of the well-known and classical localities of Palaeozoic and Cenozoic volcanic activity (450-350 and 58 million years ago, respectively) in northern England, in collaboration with Professors Gillian R. Foulger (geophysics and geodynamics), Yaoling Niu (petrology) and Richard Brown (volcanology) in the Department of Earth Sciences. This work, with comparisons to the Deccan and other flood basalt provinces of the world he has seen, will help him to understand patterns and parallels in flood basalt volcanism through space and time.