The IAS Fellowship provided a unique environment for interdisciplinary thought and time for research and writing. The structure of the fellowship, in terms of regular research events and a space in which informal research discussions could take place was invaluable for the development of both focused and speculative research ideas. 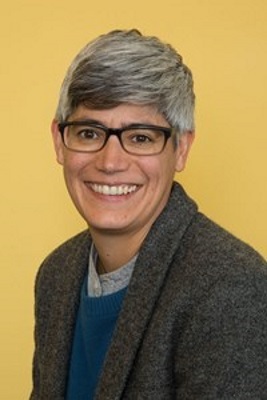 
Kathryn Yusoff is a Reader in Human Geography in the School of Geography, Queen Mary University of London. She received her PhD in Geography from Royal Holloway University of London, where she worked on the chrono-geographies of Antarctica. Her research interests include critical theory and environmental change, feminist philosophy, political aesthetics, and extraction. She is committed to interdisciplinary research and particularly, conversations across the arts and sciences. She has served on the European Science Foundation and various polar indicatives during the International Polar Year and her book Bipolar examines the visual, scientific and popular archives of the Polar Regions.

Her current research is focused on the geosocial formations of the Anthropocene, and she is writing a book on “Geologic Life”. She sees the role of geography as an interdisciplinary space for elucidating on the connections between social and geologic relations, and for understanding what difference the earth makes in thought and practice. Understanding the Anthropocene as a new epoch of thought, as well as the scientific recognition of new formations of geological force, she is interested in the origin stories and colonial histories of the Anthropocene and the continuance of these the present. Examining the politics and aesthetics of this planetary event, her work explore how the humanities can give a critical extension and speculative explication of this geology. Feminist philosophy, materialism, the natural sciences and critical race theory theoretically inform this work.

She has published widely in Theory, Culture and Society, Environment and Planning D: Society and Space, Transactions of the Institute of British Geographers, Space and Culture, Cultural Geographies, PhiloSOPHIA, Science and Culture, Radical Philosophy, as well as regular contributions to arts publications and online platforms. Recent papers include a co-edited (with Nigel Clark) issue of Theory Culture and Society on “Geosocial Formations in the Anthropocene”and in Environment and Planning A on “Geoengineering”. She has been on the editorial boards of Society and Space and The Geographical Journal and curated a number of forums as Open Site editor for Society and Space around environmental issues.

Her planned research at Durham will investigate “Geosocial Strata” as a new mode of theorizing the role of geologic forces in subtending social relations. Framed by the recognition of geologic force as a new regime of power in the Anthropocene, geosocial strata focuses on the structures of exchange between geologic strata and social worlds, and how geology inscribes social space. Following theorists such as Deleuze and Guattari, Foucault and Grosz, alongside recent work on subterranean relations and oil cultures, this project will develop the concept of geosocial strata to provide a framework for examining the expression of social forms as a product of geologic forces.

Yusoff, K. (2018) A Billion Black Anthroprocenes or None. Minneapolis: University of Minnesota Press.