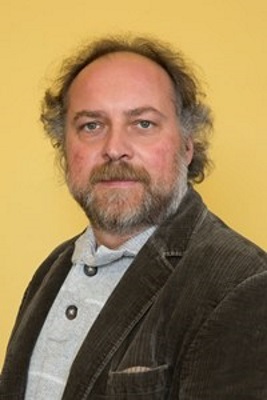 
Christian Ruby is full Professor of Materials Science at the University of Lorraine (France). He teaches at the engineering school “Ecole Supérieure des Sciences et Technologies de l’Ingénieur de Nancy” (ESSTIN - Polytech Nancy). He received his Master's degree in Materials Science from the University Joseph Fourier, Grenoble and undertook his research training in materials electrochemistry at the Fraunhofer-Institut für Silicatforschung in Würzburg (Germany). His PhD was obtained in 1997 at the University Henri Poincaré - Nancy 1 and concerned the synthesis of ultra-thin iron oxides layers by molecular beam epitaxy. After postdoctoral training, performed in the team of Professor John Barnard at the MINT Center at the University of Tuscaloosa in Alabama (USA), he took an Assistant Professor position at the University of Lorraine in 2000 and began his research activity concerning the formation and the chemical reactivity of iron species in aqueous medium at the “Laboratoire de Chimie Physique et Microbiologie pour les Matériaux et l’Environnement” (LCPME -UMR 7564 CNRS-UL).

Professor Ruby’s research expertise is in the synthesis and reactivity of iron containing compounds, in particular FeII-FeIII layered double hydroxides (LDH), more commonly called “green rust” (GR). GR is a bluish-green mineral that was first identified in 1997, the mineral was called Fougèrite (IMA 2003-057) since it was taken from a hydromorphic soil of the forest of Fougères (Île et Vilaine, France). Professor Ruby is best known for his work on the controlled synthesis of GR by using a FeII-FeIII mass-balance diagram. By using this approach GR compounds with flexible ferric molar fractions, similar to the ones observed in the natural environment, were synthesized. More recently, Christian Ruby managed a 4 year research project funded by the French Agence Nationale de la Recherche (ANR) devoted to the use of GR and related compounds for waste-water denitrification and dephosphatisation. New kinds of filtration materials constituted by nanocrystals of iron embedded into pozzolana, a volcanic rock widespread in Puy-de-Domes (Auvergne), were designed for this purpose.

Professor Ruby is the co-author of more than 70 publications in peer-reviewed journals and has filed 3 patents. He was recently the editor of the two part thematic issue “Green Rust and Related Iron Containing Compounds: Structure, Redox Properties and Environmental Applications” published in Current Inorganic Chemistry in 2015 and 2016.

As an IAS Fellow, Professor Ruby will work with Professor Chris Greenwell at the Department of Earth Sciences. The main goal of the research theme is to determine the relation between the structure of green rust and related LDH minerals and the sustainable recovery of nutrients and materials.

For a better prevention of the excessive release of PO4 in natural environment, it is crucial to be able to perform PO4 water treatments in critical zones such as the outfall pipes of waste water treatment plants (WWTP). It is particularly problematic for small and middle size WWTP situated in ecologically more sensitive rural areas where shortage of permanent human limits the possibility to perform classical chemical treatments, e.g. precipitation of PO4 by coagulants (FeIII or AlIII salts). In rural areas, reed bed filters are often preferred due to their good fit with the landscape and their low maintenance and infrastructure costs. Such filters are very efficient for removing the organic matter from waste water, but the filtration materials generally used do not retain PO4.

In this lecture, the advantages and the drawbacks of various filtration materials used for passive waste water treatments will be presented. Some of them, such as commercially available granules of calcium phosphate, were implemented in several WWTP in France. Wastes of the steel industry, e.g. blast furnace slag, were used at the pilot scale. Finally, more sophisticated materials such as ferrihydrite coated pozzolana, a volcanic rock from Puy de Domes in Auvergne, were recently developed in the laboratory. Important parameters of choice of the filtration materials are obviously their PO4 removal efficiency, but also their alkalinity and their cost of production.