My Fellowship has been an extraordinary experience that has profoundly changed me: it has given depth and stability to my research, it has strengthened my sense of cooperation and the ability of a scientific dialogue with other areas of research. 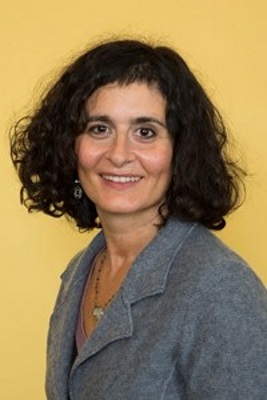 Professor de Rogatis (Ph.D. University of Perugia 1999) is Associate Professor of Comparative and Contemporary Italian Literature at Università per Stranieri di Siena and editor of the journal of literary theory and criticism Allegoria. She is a scholar of the major twentieth-century poet and Nobel Prize laureate (1975) Eugenio Montale (1896-1981). She is the author of the authoritative critical edition of one of the poet’s most significant works, Le occasioni (Milan: Mondadori, 2011) and she has solely authored two monographs on Montale, with the latest book including a comparative reading of temporality in Montale and T.S. Eliot’s poetry (Mappe del tempo. Eugenio Montale e T.S. Eliot, Pisa: Pacini, 2013).

Her most recent research focuses on the theme of female identity investigated through the comparison between classical myth and contemporary Italian, European and North American literature. As part of the comparison between the classical and the modern age, Professor de Rogatis has also conducted a contemporary rewriting of the Aeneid for two plays (Segesta Aeneid, greek Theater of Segesta, 08/16/2008; Aeneas: fate and feelings, Bolzano's City Theatre, 19-11-2009).

She is currently garnering the attention of international critics with her contribution to a new American collection of critical essays on Elena Ferrante (‘Metamorphosis and Rebirth: Greek Mythology and Initiation Rites in Elena Ferrante’s Troubling Love’, in The Works of Elena Ferrante: History, Poetics and Theory, edited by G. Russo Bullaro and S. Love, Palgrave Macmillan, 2017). The essay has also been quoted by the writer Jhumpa Lahiri as part of a public debate with Elena Ferrante’s American translator, Ann Goldstein (https://www.youtube.com/watch?v=ZlnNyqqyYh4, 42.30 - 47.50). Moreover, Professor de Rogatis has edited an entire section of the journal Allegoria dedicated to Ferrante’s Neapolitan Novels (title of this section: ‘Who is afraid of Elena Ferrante?’) and published in 2016 (issue 73), in which she invited 11 scholars to define the most convincing aspects of Ferrante’s tetralogy. The resulting 11 essays include a contribution by Professor de Rogatis herself (‘Metamorfosi del tempo. Il ciclo dell’Amica geniale’), while four others were written by scholars from the Anglo-American academic context (including articles by Laura Benedetti, Stiliana Milkova, Olivia Santovetti and Katrin Wehling-Giorgi).

Professor de Rogatis has been interviewed – together with Dr Olivia Santovetti (University of Leeds) – for a podcast entitled ‘The World in Words’, edited by Nina Porzucki (nina.porzucki@bbc.co.uk) and dedicated to Ferrante and her use of language for BBC World (forthcoming). She held a research seminar at Durham University (26 May 2015; ‘Troubling Love di Elena Ferrante. Mito classico, riti di iniziazione e identità femminile’) and Leeds University (4 May 2016; ‘Controtempi della modernità. Il ciclo dei Neapolitan Novels’). Professor de Rogatis has also contributed an article to the international volume Made in Italy e cultura,in which she analyses the traits relating to gender and Neapolitan identity that have made Elena Ferrante famous in the Anglo-American world (‘Elena Ferrante e il Made in Italy. La costruzione di un immaginario femminile e napoletano’,in Made in Italy e cultura; Palermo: Palumbo, 2016, pp. 288-217). She has participated as a speaker – together with Dr Katrin Wehling-Giorgi - on a panel on Elena Ferrante as part of the SIS (Society of Italian Studies) Biennial Conference (Oxford, 28-30 September 2015) and at a Study Day at the University of Leeds (13 October 2016) with Elena Ferrante’s American translator, Ann Goldstein. She is also organising a Study Day on Ferrante in Naples (for 7 April 2017), which will also include Ann Goldstein.

Her study of the female imaginary and the literary forms into which this imaginary is inscribed is in fact conducted through a hybridisation of perspectives in the analysis of myth and ritual structures. Adopting a perspective that departs from symbolic anthropology, her research positions itself beyond the polarities of Western thought (for instance of the binaries male/female, civilised/primitive), identifying the recurrence of the archaic (relating to gender or geography) in contemporary modernity instead. The specific contribution that Professor de Rogatis will bring to the topic of the 2017 Fellowship is the relationship between Structure, rite and female identity. Her methodology will take inspiration from Lincoln’s and Burkert’s studies of myth, Turner and Van Gennep’s work on liminality, Kristeva’s notion of abjection, Judith Butler’s work on gender studies and Luisa Muraro’s work on sexual difference. Furthermore, her research on Montale and T. S. Eliot will provide at Durham fruitful opportunities of intellectual exchange with other scholars in Italian, English Studies and beyond.

In this lecture, Professor Tiziana de Rogatis will identify the salient features that allow us to define the structure of initiation rites from an anthropological perspective. She will then establish a connection between these ritual repertoirs and the narrative mechanisms of a selection of texts of premodern, modern and contemporary writers that describe the fate of a woman. According to Arnold Van Gennep and Victor Turner, the rites of passage were a way in which the community exorcised and reworked the changes. The ritual structure represents the continuity that contains the discontinuity, because it is the narrative web that holds the metamorphosis of the individual together in its community weave, and because it is the emotional tale that holds together past and present in an eternal conjunction (guaranteed by the transmission of the ceremonial ritual). The structures of the initiation rites are a privileged point of view through which the formation of feminine identities in modernity can be seen as identities in continuous and traumatic metamorphosis: these are, in fact, emerging subjectivities that are however weakened by the social and psychic inheritance of historical subordination.

Her hypothesis is that at some decisive junctures of modernity many writers portray female characters through a problematic ritual structure within which an enormous amount of details, accessories, and symbolic scenes help to define the tragic status of these female protagonists: their belonging to a liminal phase (the nucleus of the initiation rites, according to Van Gennep and Turner) that is located between the time and space of community life and the time and space of a heterodox, transgressive and eccentric dimension. Professor de Rogatis will focus in particular on the figures of Lady Macbeth and Anna Karenina. Moreover, with reference to some textual examples drawn from the texts of Elsa Morante, Toni Morrison, Annie Ernaux, Elisabeth Strout and Elena Ferrante, she will also define a new parable of contemporary feminine ritual that moves away from the suicidal drift of pre-modern and twentieth-century heroines to identify with the enchantment of writing and metamorphosis instead