The intellectual environment of the IAS provided an interdisciplinary atmosphere that nurtured creative thought across the respective fields of the fellows and also within them. This is a gift that will keep on giving in my opinion and that will stimulate our thinking and intellectual production for years to come. 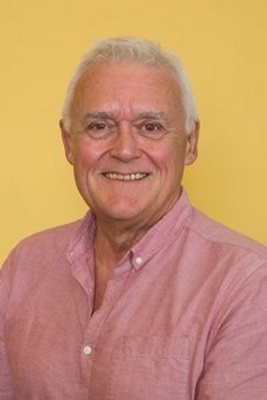 
Dennis Beach was born in England in 1956 and grew up as a UK national. He moved to Sweden in 1983, where he is currently Professor of Education at the Department of Education and Special Education at the University of Gothenburg, and the Academy of Library, Information and Educational Science and IT at the University of Borås. He has previously also been Visiting Professor at the Department of Sociology at Lund University (2010-2011), Sweden, at Malmö University (2005-2006), Sweden, at Linnaeus University (2007-2008), Sweden, and at the Froebel Institute of Roehampton University in London, England. He is currently Chief Editor for the international research journal Ethnography and Education, and a Senior Editor for the Oxford Encyclopedia of Education Research. He is the principal commissioned editor of a major new international research handbook, from Wiley Publications, which represents his latest major international publication. Co-editors on this handbook are Professor Carl Bagley of Durham University and Associate Professor Sofia Marques da Silva of Porto University.

These appointments reflect well special areas of research interest, which lie within ethnography and the sociology and politics of education and teacher education. He has published extensively in these fields, in research journals and book chapters and he has also authored, co-authored and edited internationally published books on them in relation to education policy, education and equity, education and marginalisation, and the politics of education and teacher education reform. In terms of his present research he is particularly interested in the intersections between social class and race in the politics, policies and history of education inclusion and exclusion in the Nordic Countries, with these works being represented in press, in progress and planned for future publications.

This work, which is tightly linked to the Nordic Research Center of Excellence in Researching Education Justice (JustEd) will be conducted as part of the IAS Fellowship at Durham. Professor Beach is a founder applicant for and team leader in JustEd as a result of the acknowledgement of his research in this area in the Nordic region. JustEd is a multidisciplinary network examining justice and equity in Nordic education systems and committed to promoting positive future developments. It currently consists of a network of 14 participating institutions in the Nordic countries and international partners in France, Italy and Australia. The network is coordinated at the University of Helsinki, Department of Behavioural Sciences and funded by the Nordic Council of Ministers in their NordForsk programme. He was the scientific coordinator of an earlier funded network within this programme, addressing the risks of social and educational marginalisation for trans-nationalist youth in the Nordic region.

Professor Beach’s research career started relatively late by recent international standards, but advanced quite quickly. He completed his doctoral research, which was conducted at the University of Gothenburg on the problems of teacher education reform, in 1995 and then worked first as a Senior Lecturer and then Associate Professor before taking up a Professorship at the University of Borås in 2004. The professorship was attained on the basis of extensive publications following successful research bids related to the continuing problems of education and teacher education change, which continued from his first two major publications, which were his thesis from 1995 in the Gothenburg University Press Acta Series and a subsequent publication in the same series from 1997, on the educational politics, power relations and micro-politics of higher professional education in Swedish universities.

Both of these books were influential on the development of the directives to and recommendations of the 1997 Teacher Education Committee in Sweden, which led to the development of the first unified professional education programme for teachers in Sweden’s comprehensive school in 2001. The 1997 book was also an early example of multi-sited ethnography. It helped establish the author as a leading international intellectual in the ethnography of education, which is the field where his work is most well-known, and where he has to date published over 50 international research articles and book chapters. His latest publication in this field is a meta-ethnographic article addressing personalisation and the commodification of education in Sweden. It is the latest in a series of methodology texts within the ethnography of education.

In addition to his work with the JustEd center of Excellence mentioned above, Professor Beach is currently working on three research projects: as co-applicant and scientific advisor on a project with Anita Eriksson (Borås), he is researching the development of early childhood education teacher professional identities subsequent to the revision of the National Education Act and School Curriculum in 2010; with Professor Elisabet Öhrn he is involved as co-applicant and co-leader on a project examining aspects of rurality and education policy in Sweden; and he is also independently conducting meta-ethnographic analyses concerning educational justice and marginalisation in relation to transnationalist identity and global diaspora in preparation for future funding submissions, some of which will be developed during the Fellowship together with colleagues from Durham. Professor Beach was also co-applicant and now senior member of a Nordic collaboration spin-off project on Justice in Higher Education, funded by the Nordic Council of Ministers.

In addition to above named activities Professor Beach has supervised over 20 successful PhD students and is currently involved in the supervision of four more. He is also a member of the Faculty Board of Education and the University of Gothenburg and the Faculty Board of the Social Sciences at Linnaeus University, Sweden. He is scientific advisor on the International Masters Programme on Educational Research at the University of Gothenburg, where he also teaches research methods and the sociology and politics of education and education inclusion. Professor Beach is also an international representative member of the PhD Board for Teacher Education Research of the Danish Ministry of Education.

IAS Fellow's Public Lecture - Capitalism, class inequity, and education justice in the Nordic countries: The myth of the Nordic model

Based on a series of recent meta-ethnographic publications this presentation will address the concept of the Nordic educational model and claims from and about it concerning issues of education justice, class parity and equity. It will develop arguments about these systems as being far from just and equitous historically, and as worsening in these respects following a turn toward market politics in recent decades. Three main conclusions from the research will be discussed.
The first is that the political turn to market politics has added to inequalities and created possibilities for private actors and companies to profit from poverty and problems of inclusion rather than, as argued by the purveyors of the market alternative, providing welfare solutions for them. The argument here is that the market based approaches to education supply did not cause inequality and exclusion in the Nordic countries; or as far as we know elsewhere either for that matter. They rather exploited existing mediatised inequalities as a way to (a) help motivate reduced expenditure on state owned public services and (b) promote private alternatives from. In this sense the mediators of market politics should be understood as preying on and profiting from existing inequities, which they also subsequently then helped to make worse.
The second conclusion is different. It derives from the ethnographically described fact that despite betrayal by the governments that are meant to represent their best interests and safeguard their future, young people in education have shown involvement, commitment, effort, creativity and a massive learning potential that can be seized on by curriculum developers and political and institutional educational leaders.
The third conclusion is that this is not always happening and that it provides a problem of significant proportions that offers an important future challenge for education organisations and their leaders, politicians, curriculum developers and of course researchers as well.