It was a privilege to work with highly motivated and engaged scholars who were willing and able to devote time to thinking collectively about different problems. I found these collective activities to be rich sources of inspiration for novel research ideas – after each seminar I came away feeling newly energised. 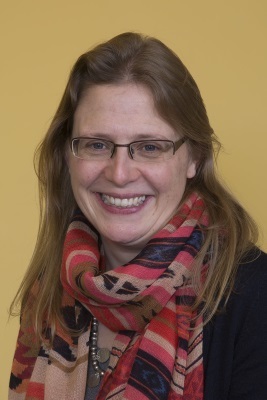 
Hannah Smithson is an Associate Professor in the Department of Experimental Psychology, at the University of Oxford, and a Fellow of Pembroke College, Oxford. Her research focuses on the neural mechanisms that underlie perception. To test different models of visual processing she uses psychophysical experiments to measure human performance with specific visual stimuli and to infer the processing that supports this performance. In addition to fundamental research on the mechanisms of normal adult human perception, she seeks to explore potential applications of her findings - for example, in developing new display technologies and in understanding limitations of vision in disease.

Professor Smithson’s first degree was in Natural Sciences (University of Cambridge: 1993-1996) where she stayed to complete a PhD (University of Cambridge: 1996-2000). She spent two years as a post-doc in the USA, with Joel Pokorny in Chicago working on colour adaptation (University of Chicago: 2000-2001), and with Qasim Zaidi in New York City working on colour constancy (SUNY College of Optometry: 2001-2002). She returned to the UK as an Affiliated Lecturer at Cambridge (2002-2003), before moving to London to work with Andrew Stockman on adaptation (Institute of Ophthalmology, UCL: 2003-2005). She took her first lectureship at Durham University (Lecturer 2005-2009; Senior Lecturer 2009-2011) and moved from there to the University of Oxford. She sits on the joint Editorial Board of Perception and i-Perception, and on the Directors’ Board of the International Colour Vision Society (2008-2016). In 2011 she was awarded the Applied Vision Association’s Marr Medal for ‘extensive work on colour vision - from photoreceptors to colour constancy’.

She is currently involved in several research projects including 'The perception of material properties' funded by the Wellcome Trust. In this project Professor Smithson and colleagues ask how the signals from the three classes of cone photoreceptors in the retina are processed to allow us to identify the colours of objects and light sources in the visual scene. Professor Smithson and her colleagues are particularly interested in the visual cues that allow us to infer the material properties of objects – such as glossiness, roughness and translucency.

Professor Smithson is a founding member and Co-I for the Ordered Universe Project (ordered-universe.com) funded by the AHRC, dedicated to fresh and original examinations of medieval science using interdisciplinary readings of the scientific works of the remarkable English thinker Robert Grosseteste (c.1170-1253). Work to date has focused on medieval conceptions of colour-space, and their application to the natural world, culminating in models of the family of natural rainbows.

A major focus of Professor Smithson’s current research is to develop an adaptive optics enabled ophthalmoscope to capture images of the retina with high fidelity, sufficient to see individual cone photoreceptors in the living human eye. In collaboration with instrumentation specialists at Oxford and Durham, and with clinical ophthalmologists, the team is imaging patients with inherited retinal degenerations to probe the relationship between detailed patterns of loss and underlying genetic causes of degeneration.

Whilst in Durham her primary engagement will be to explore two central elements of pre-modern appreciation of scale and measurement: astronomy and the human eye. As an experienced collaborator on the Ordered Universe project, which has developed new methodologies to encourage medievalists and scientist to work together in fresh ways, she will collaborate with the Department of History, with close links to the Centre for Advance Instrumentation in the Department of Physics.

Can science today learn from thirteenth century literature? An interdisciplinary team of physicists, medievalists, Latin scholars and historians of science has embarked on a rich encounter with the great medieval English thinker Robert Grosseteste (1175-1253). The team presents Grosseteste’s treatise the De colore (On colour), to reveal and explore the three-dimensional space within which he characterises colour. His later treatise the De iride (On the rainbow) revisits his theory of colour generation, but with surprising results when seen from modern perspectives. By using medieval studies and modern colour science, the treatises can be interpreted in new, stimulating and more complete ways. Almost 800 years after their inception, Grosseteste’s writings prompt us to explore a new coordinate system for colour.

For further information on the Ordered Universe Project see: ordered-universe.com