The IAS Fellowship has significantly impacted my thinking in two distinct ways: has opened a path to the study of certain geological flows, whereby my past experience can find new applications, and the IAS experience has also opened my mind to interdisciplinary studies. 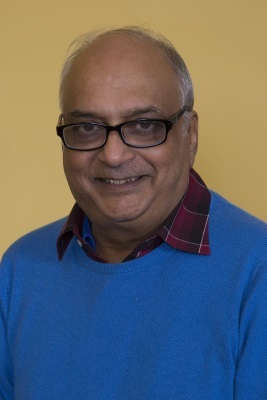 
Ranga Narayanan is a Distinguished Professor and Distinguished Teacher-Scholar at the University of Florida, Gainesville, FL. His research is in the area of pattern formation. This field has applications ranging from earth science, to the making of materials in outer space and on earth, to biomedical science and even to cell biology. As an engineer, Professor Narayanan is concerned with science questions as to how length and time scales compete to form patterns and what fundamental connections can be made between the various physical situations that generate patterns. Applications of his research include ways to “tune” patterns to create better and useful products such as better drug delivery systems and better semiconductor and energy efficient devices. As a result of his work he now directs a major National Science Foundation research training “center” grant in the field of patterns in fluids and interfacial science that has affected over 35 doctoral students in the College of Engineering. In addition to research, this project seeks to internationalize graduate education.

Professor Narayanan has also directed two major outer space experiments, designed to confirm theories on the effect of microgravity on crystal quality. These widely publicized space flight experiments were conducted in 1996 and 1997. This research has led to a new and clear interpretation of fluid dynamical patterns seen during convection and the transition of such patterns to near chaos. He continues work on microgravity pattern formation with two prospective experiments on the International Space Station, in collaboration with the Japanese and European Space Agencies.

Professor Narayanan has over two hundred published papers and conference presentations and four authored and edited books. He serves as an executive editor of the Journal of Engineering Mathematics and is on the editorial board of several scholarly journals. In addition he has been invited several times as a visiting faculty to major universities in France, Japan, Germany, Belgium, Israel and India. Among his many awards are the A.v. Humboldt Senior Award (2016), J.W. Fulbright Distinguished Chair Fellowship (Israel 2012), European Commission Senior Scientist (2011-12), Distinguished Foreign Scientist Award from the Government of India (2011), a Chevron Chair at IIT Madras (2011), Japan Society for Science Foundation Fellowship (2009), J.W. Fulbright Senior Scholar Fellowship (Belgium, 2001), and Alexander von Humboldt Fellowship (1989). He is a fellow of the American Physical Society, the American Association for the Advancement of Science, the American Institute of Chemical Engineers and has been elected as Academician to the International Aeronautics Academy (2012).

Abstract Pattern generation in the sciences abound in materials processing, earth sciences, ecology and theoretical biology and even encompass fields well outside of the sciences. For example, scales and associated patterns in space and time are relevant in fields such as economics where competition between time-scales of supply and demand, or between controls and free-markets leads to cyclical patterns in time. Another beautiful example of patterns in space is seen in the “Sky and Water” painting of Escher where smooth morphological transitions emanate from an artist’s ingenuous ability to connect patterns and scale in an almost seamless manner.
Pattern formation in nature and in the physical sciences is intimately connected with nonlinear interaction of competing length scales. Nature’s patterns often occur spontaneously while engineered patterns must be carefully manipulated. Yet there is a way to relate the two. Physicists and engineers do this by an invention called a dimensionless group. In this talk Professor Ranga Narayanan shall introduce such groups to consider several instances where patterns by design emulate nature’s patterns – the patterns of the divine.