The Fellowship has had a great impact on my research. Interactions with the other Fellows and the IAS Directors suggested new directions for developing my existing ideas about scale. 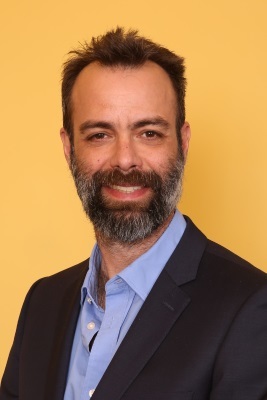 Patrick McGivern is a Senior Lecturer in Philosophy at the University of Wollongong, Australia. His research is primarily in philosophy of science, and he has interests in a variety of problems concerning the nature of scientific modeling, reasoning, and explanation. In addition to philosophy, Dr McGivern’s academic background includes degrees in English literature and in cognitive science, along with a brief career in computing science and artificial intelligence. He retains interests in all of these areas. He sees the role of Philosophy as one of elucidating connections and relationships between seemingly different ways of understanding the world.

Much of Dr McGivern’s recent work has focused on the role of scale in scientific explanation, and on ways in which explanations from different areas of science can be associated with different scales. The problem of reconciling explanations and models from different areas of science is widespread, appearing in discussions of the relationship between different branches of physics, in arguments about the significance of individuals and groups in evolutionary biology, and in problems involving the relationship between psychology and cognitive states and the underlying brain states and processes that realize them. Concentrating on scale – and, in particular, on the frequent need for ‘multi-scale’ models and explanations – allows many of these problems to be formulated and investigated in a clear and productive manner. However, this also raises significant questions about the nature of scale and the role of scale in theorizing and explanation. Clarifying and answering such questions has been the focus of much of Dr McGivern’s published work.

Dr McGivern’s research at Durham will involve investigating concepts and problems of scale across a range of disciplines. The concept of scale figures prominently in a wide range of disciplines, including physics, biology, ecology, geography, political science, and cognitive science. However, researchers in these different areas often conceive of scale in quite different ways, and often focus on distinct problems. At the same time, there are common concerns about scale that are found across many areas, despite this diversity of concepts. These include concerns about the translation of evidence from one scale to another, the application of models to a variety of scales, and the integration of theories and models from a range of different scales. Dr McGivern’s goal is to develop a clearer account of these varying concepts of scale to allow the relationship between these problems in different disciplines to be better understood. This account will develop in a monograph, tentatively titled The Significance of Scale.

Scientists often distinguish between a wide variety of scales in world. For example, biologists distinguish between organism scales and species scales, ecologists distinguish between patch scales and landscape scales, and physicists distinguish between micro scales and macro scales. There are two prominent ways of understanding this diversity of scales. According to the first, divisions between scales represent arbitrary choices in how we describe the world: the world itself does not have distinct scales, though it is often convenient for us to describe it as if it did. According to the second, distinct scales represent real divisions in the world that exist independently of our particular motives and interests. In this talk, Dr Patrick McGivern will explain the significance of these two alternatives for a range of problems concerning scale and will defend a version of the second view: we live in a multi-scale world, and recognizing real divisions between scales is crucial for understanding it.