The Durham IAS Fellowship experience is an impeccably conceived, organized, and executed program in which I have had the opportunity to participate. It exposed me to viewing my own field of research through the eyes of experts in other fields. 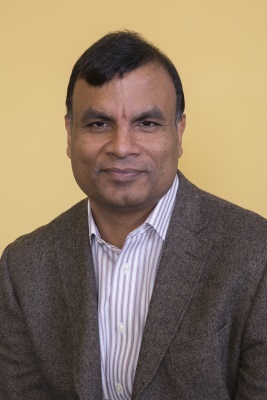 Kalyan Perumalla, Ph.D., is a senior R&D staff member and manager at the Oak Ridge National Laboratory in the Computational Sciences and Engineering Division. He founded the Discrete Computing Systems Group in the division and serves as its Group Leader. He also serves as an adjunct professor in the School of Computational Sciences and Engineering at the Georgia Institute of Technology.

Dr Perumalla is a winner of the prestigious US Department of Energy Early Career Award in Advanced Scientific Computing Research, 2010-2015, providing $2.5million for research dedicated to reversible software at Exascale. His primary research contributions are in the application of reversible computation to high performance computing and in advancing the vision of a new class of supercomputing applications using real-time, parallel discrete event simulations. He has extensively published articles and delivered distinguished lectures and invited tutorials on these topics. His recent book Introduction to Reversible Computing (CRC, 2013) is among the first few in its area. He has co-authored another book, three book chapters, and over 100 articles in peer-reviewed conferences and journals. Four of his co-authored papers received the best paper awards, in 1999, 2002, 2005 and 2008, and two were finalists in 2010. His research prototype tools in parallel and distributed computing have been disseminated to research institutions worldwide. In the course of over 15 years of his research career, he helped pave new technological paths and established milestones in terms of computing speeds and modeling scales. Some of the world’s most scalable parallel discrete event executions to date were achieved by his work: packet-level Internet modeling scaling to million-node networks, individual-level epidemiological outbreak models scaling to nearly billion individuals, Exascale program design models scaling to hundreds of millions of concurrently active computational threads, and social behavioral models with millions of encapsulated behavioral agents.

Dr Perumalla serves as program committee member and reviewer for several international conferences and journals in computing. He has also served as program chair or co-chair of international conferences in computer-based modeling and simulation. He is a member of the editorial boards of the ACM Transactions on Modeling and Computer Simulation (TOMACS) and the SCS Transactions of the Society for Modeling and Simulation International (SIMULATION). He has performed research as an investigator on several research programs sponsored by US federal agencies including the Department of Energy, Department of Defense, Department of Homeland Security, and the National Science Foundation.

As part of his Fellowship assignment at the IAS at Durham, Dr Perumalla plans to collaborate with Professor Georgios Theodoropoulos and other faculty in the areas of modeling and simulation of complex systems, with a focus on scalable simulation of very large model configurations, uncovering emergent phenomena at large system scales, and exercising dynamic feedback effects that are difficult to capture outside of simulation.

Map - Josephine Butler College is denoted as building No: 55