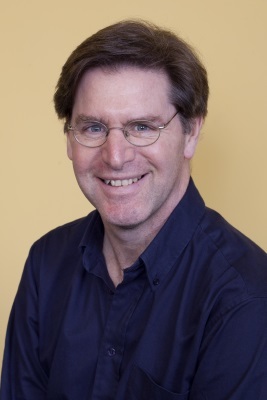 Andrew Crumey is a novelist and critic whose work reflects his academic background in theoretical physics and his interest in the history of ideas. As lecturer in creative writing at Newcastle University he is concerned with the philosophy of fiction and the relationship between literature and science.

Born in Glasgow in 1961 he gained his PhD from Imperial College, London, for work on integrable dynamical systems, and was post-doctoral research associate in the department of applied mathematics at Leeds University (1989-92). His first novel, Music, in a Foreign Language (1994), set in a dystopian communist Britain, won the Saltire Society Prize for Best First Book and marked the beginning of a series of works exploring themes in real and imaginary history.

His interest in the philosophes of the 18th century led to the novels Pfitz (1995) and D'Alembert's Principle (1996); the former a New York Times Notable book, the latter nominated for the Booker Prize. Mr Mee (2000), longlisted for both the Booker Prize and IMPAC Award, combined portrayals of Rousseau and Proust with the story of a lost encyclopaedia describing an alternative universe.

A regular book reviewer for Scotland on Sunday since 1996, he was the newspaper's literary editor from 2000 to 2006, and has written for other papers including the Guardian, Independent, Telegraph and Financial Times. He has served on various judging panels and advisory committees including the Scottish Arts Council Book Awards and the Macallan Short Story Competition, and has participated in international events such as the Genoa Science Festival and Moscow Book Fair, conferences on mathematics and literature (e.g. MathKnow), and broadcasts including Radio 3 The Essay and the Radio 4 series Relatively Einstein. His fiction has been translated into thirteen languages, and he has been recipient of a Northern Arts Writers Award and Arts Council Writers Award.

His novel Mobius Dick (2004), a finalist for the Commonwealth Writers Prize, brought to focus his interest in the scientific and cultural significance of multiple realities (particularly Everett's Many Worlds interpretation of quantum mechanics). He further developed this in Sputnik Caledonia (2008), for which he won the Northern Rock Foundation Writers Award; it was also shortlisted for the James Tait Black Memorial Prize and Scottish Book of the Year, and longlisted for the Arthur C Clarke Award.

Teaching on the MA and PhD creative writing programmes at Newcastle University since 2007, he has a particular interest in the theories of Bakhtin and Benjamin. In 2010 he conducted an AHRC-funded practice-led research project, "Quantum Suicide: Walter Benjamin and the multiverse", centred on Benjamin's interest in Louis-Auguste Blanqui (1805-81), whose pseudo-scientific cosmology of multiple realities and alternative histories was equivalent, in Benjamin's view, to Nietzsche's eternal recurrence, and should be seen as a product of nineteenth-century capitalism.

During his time at IAS, Andrew Crumey will work on a novel arising from this research, and wishes in particular to study the concept of "prophecy" as it arises in fiction and science.

Sometimes novels make predictions about the future that turn out to be true.  Are they lucky guesses, shrewd insight or a sign that creative imagination can be prophetic? Drawing on my own experience as novelist and physicist, I explore the phenomenon of literary precognition.

Some predictions are strikingly precise: in Gulliver's Travels we read that Mars has two moons, though they would not be discovered until a century and a half later. The late nineteenth and early twentieth centuries saw profound meditations on the nature of time from Einstein and Proust; but before either of them, H. G. Wells was considering the possibility of time travel. Most remarkable of all, perhaps, is Poe's anticipation of Big Bang theory.

Yet prophecy need not only refer to the future: the prophet is one who interprets and transmits divine will, and it was this aspect that E. M. Forster emphasised in his consideration of the ‘prophetic' quality of fiction. Even if the novelist is not divinely inspired, he or she may be able to interpret the present and past in such a way as to point towards the future.

A writer and a scholar discuss the future of the humanities and their evolution in a new, practical direction. What is the connection between creativity and education and how can the academy embrace programs not only in creative writing but also creative thinking? Should we teach students how to write literary manifestos and construct alternative worlds? What would be a new transformative universe that is now born from the universe of information?