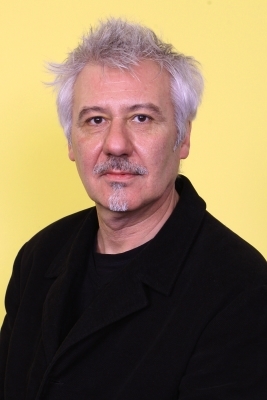 Chris Gollon is an established name in British painting. Born in London in 1953, Chris first came to the attention of the art world as a finalist in The Spectator Prize in 1989. He has since exhibited widely in Europe and the USA. He exhibited in ART'97 Chicago, and has had 6 solo museum shows in the UK. In 1998, he exhibited with Yoko Ono, David Bowie and Gavin Turk in 'ROOT', a crossover exhibition of contemporary music and art created by Thurston Moore of Sonic Youth, at the Chisenhale Gallery, London.

In 2000, Chris Gollon accepted a major commission from the Church of England to paint 14 Stations of the Cross for a grade-one listed church in London designed in 1826 by Sir John Soane. Widely featured in the national press, the commissioned paintings were finally unveiled and used in the Good Friday service 2008 at St John on Bethnal Green, and will be installed permanently in the church by Easter 2009.

In 2001, the award winning River & Rowing Museum in Henley-on-Thames (with the aid of the Victoria & Albert Museum) purchased Gollon's hinged triptych Big Fish Eat Little Fish, which now forms part of the permanent collection alongside works by Frink and Dufy. In 2004, Chris Gollon was invited to show in St Paul's Cathedral with Bill Viola, Craigie Aitchison and Tracey Emin.

In 2005, the Huddersfield Art Gallery purchased a major work by Chris Gollon entitled Einstein and the Jealous Monk, which now hangs in the permanent collection alongside works by L.S Lowry and Francis Bacon. In 2007, he accepted a commission from the River & Rowing Museum to paint the Henley Royal Regatta. Unveiled in June 2008, his painting entitled ‘Gollon At Henley' will hang permanently in the museum's collection in juxtaposition with Raoul Dufy's ‘Regatta at Henley'. In 2009 - 2010, a tour is planned to American museums for Gollon's painting of the Regatta and associated studies.

Chris Gollon began collaborating with film makers JABOD in 2005 to create a new cinematic art work, featuring over 500 of his paintings set to music by Gavin Bryars (with Tom Waits), Paolo Conte and Calexico. The film installation, entitled ‘Kaleidomorphism', was successfully premiered in 2008 at the East End Film Festival in London.

His intention during his time at the IAS is to interact with the other Fellows, whilst preparing to host an exhibition of his work. It is from this intercourse that he hopes to approach the themes of being human in a new and hopefully significant way.