US Military Bigger Polluter Than Most Countries 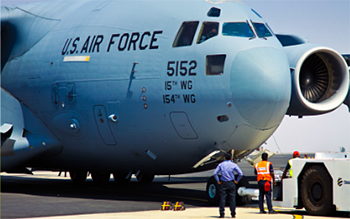 Surprised by the headline? No wonder when discussions about greenhouse gas emissions tend to focus on statistics for countries, not institutions. But research from the Department of Geography, in partnership with Lancaster University, found that the US military's carbon footprint is so big it out ranks that of most countries in the world.

The researchers looked at the carbon 'boot print' of the US Defence Logistics Agency-Energy (DLA-E), the primary buyer of fossil fuels for the US military. With a purchase power of this scale, they are a powerful actor on the global oil market.

The US military is the 47th largest emitter of greenhouse gases in the world, when looking at emissions from fuel use. When comparing the US military’s fuel usage to the 2014 Wold Bank data around liquid fuel consumption by country, the researchers found that the US military was comparable to Peru and Portugal.

The fuel powers everything from routine base operations in the USA to bases oversees such as in Afghanistan.

The US military is the single largest institutional consumer of fossil fuels in the world, something the research team argues needs to be addressed as part of global commitments to the reduction in greenhouse gas emissions.

However, this dependence on fossil fuels is unlikely to change in the short-term given the life cycles of existing military aircraft and warships, which lock the US military into fossil fuels for years to come.

The research team suggests bold approaches are needed to reduce US military dependence on fossil fuels to help reduce greenhouse gas emissions and de-incentivise use of fossil fuels for their future infrastructure.