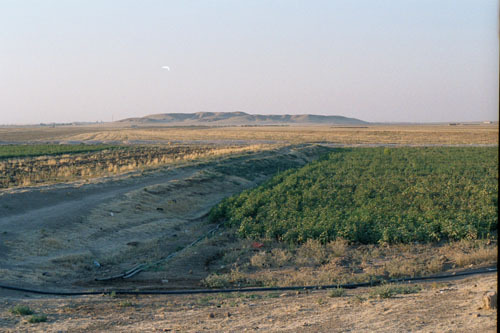 For many years the rain-fed steppe lands of Syria, northern Iraq and southern Turkey have been regarded as archaeologically less rich than southern Mesopotamia. The archaeological mounds (tells) are not as large as those in the irrigated south and the region never quite produced as many cuneiform tablets. However, the last thirty years have witnessed a considerable surge in archaeological research in the northern Fertile Crescent and we now have a wealth of information that underscores its importance to our understanding of the development of farming communities and early civilizations. Today we are in a position to bring together the evidence from ancient landscapes, settlement patterns and archaeology within this large region through a single project: The Fragile Crescent Project.

With the help of a 4-year AHRC research grant of £407,799 the 'Fragile Crescent Project' aims to chart the rise and fall of Bronze Age settlement within the Fertile Crescent in a way that is comparable with the so-called heartland of urban development in southern Mesopotamia. For many years, PI T.J. Wilkinson and co-PI Graham Philip have been assembling a data base from numerous archaeological surveys over a vast area from the Tigris River to the Mediterranean Sea. These data will now be brought together within the same analytical framework by Research Associate Nikolaos Galiatsatos and a PhD student, under the oversight of co-PI Daniel N.M. Donoghue (Department of Geography). The primary data sources will be high resolution satellite images together with the original surveys conducted over the last thirty years. The improved data quality, and the ability to carry-out GIS analysis at scales ranging from individual survey regions to sub-continental, will enable us to understand more clearly the development of early towns and cities, the ebb and flow of population, and the fluctuations between sedentary and nomadic ways of life, over some 2,500 years from ca. 3500 - 1000 BC.