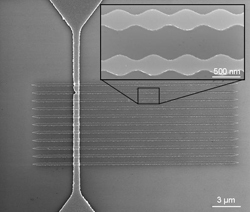 The investigation into the behaviour of domains walls in magnetic nanowires is significant to the development of novel spintronic devices for memory and logic amongst other technological applications. This research is also relevant to the further understanding of the fundamental magnetisation reversal processes that take place in these materials.

Here the domain wall behaviour in edge modulated nanowires is investigated with samples prepared in a two-step electron beam lithography process. First, the patterning of the nanowires is performed with the deposition of NiFe. This is followed by the patterning of an Au conductive stripline for the injection of domain walls into these nanowires. This fabrication procedure makes use of image recognition and automation scripting features during the lithography process. 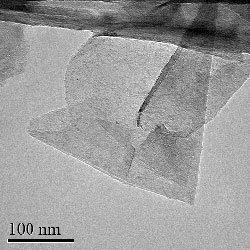 TEM is useful as we can analyse individual, small scale, graphitic nanocarbons. Bright field imaging provides information about the general size and shape of the nanocarbons, while high resolution imaging allows us to judge the quality of the material, particularly with regard to how well graphitised it is. The graphitisation of the material is also analysed using select area electron diffraction, and by considering the shape of the carbon K edge in electron energy loss spectra. Energy filtered TEM allows us to calculate the approximate thickness of our material and to produce maps of elemental distribution across the material. Finally energy-dispersive X-ray spectroscopy can be use to look for small-scale impurities. 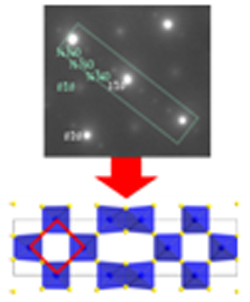 Structure and properties of functional materials

Functional inorganic materials are of interest, among other things, for their unusual thermal expansion (e.g. strong negative thermal expansion [NTE] over wide temperature ranges), superconductivity, magnetism and ionic mobility at low temperatures. These interesting properties are often encountered alongside displacive or ordering induced phase transitions from a high temperature substructure to a more complicated low temperature superstructure, sometimes via intermediate phases. Selected area electron diffraction is frequently key to determining the true symmetry present in many of these polycrystalline materials, as diffraction from single domains can be obtained. This is, in turn, vital for determining the true structure. It is only by understanding the structure of materials that their bulk properties can be understood.

Most studies of high-level igneous intrusions have concentrated on their geometry and internal architecture, while only a few have paid particular attention to the emplacement-related host rock deformation structures, which preserve a record of how magma is accommodated within the crust, i.e. the intrusion ‘space problem’. Our studies aim to develop a greater understanding of how these igneous intrusive bodies are emplaced and accommodated within the shallow crust, using the classic exposures we find in the Henry Mountains, Utah, USA.

Kinematic and geometrical studies of emplacement-related structures in the host rocks in the field are supplemented by micro-scale textural and geochemical studies of both igneous intrusion and sedimentary host rock samples. Using SEM and optical microscopic studies we can recognise various micro-structural fabrics associated with both magma flow and accommodation structure. Backscattered electron imaging at high magnifications, producible on the SEM, enable us to carry out more precise textural analysis of these structures. Qualitative and quantitative energy-dispersive analyses of x-rays (EDX) are being carried out on a number of samples in order to help identify fine-grained alteration products and fluids that may have migrated from the magma into the sandstone host-rock. Element mapping is also helping to identify the compositional variation between alternating fine-grained bands, allowing for interpretation as to why certain samples have deformed in the manner they have. 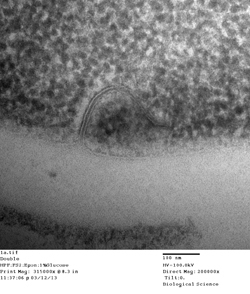 The endocytotic cascade and scission event are highly conserved throughout the eukaryotic kingdom of which dynamins are an integral part. There are several mammalin dynamin homologues all displaying a common mode of action, within the scission event; the first is in elongation of the membrane which forms the vesicle neck, bringing the two adjacent sides of the bilayer within close proximity. The second is the scission event, where the vesicle is ‘pinched’ from the membrane. Vps1 is a yeast dynamin-like protein that exhibits multiple functions throughout S. Cerevisiae in the context of membrane curvature and scission. The basis for the work is to elucidate how it is Vps1 carries out its function within an endocytic context by analysing its quaternary structure, associations formed with other proteins that are required for normal function and to demonstrate the importance of actin binding domains within the structure. In this way the conservation of fundamental mechanisms required for scission and curvature of membranes can be extended to the yeast model and a more comprehensive model of the mode of action of Vps1 can be put forward. 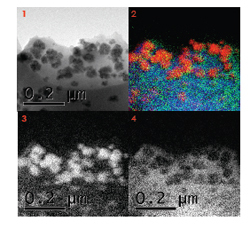 This research work was devoted to the synthesis and magnetic characterization of Ni nanoparticles within metal-organic matrices. The Ni nanoparticles were created using a room temperature synthetic process involving Ni(COD)2 (COD=1,5,-bis-cyclooctadiene) and 2,3,5,6-tetrafluoro-7,7,8,8-tetracyanoquinodimethane (TCNQF4).The size of the Ni nanoparticles was controlled by using different solvents; the images shown in the figure were of a sample synthesized using dichloromethane.

The intense activity in the study of resistive organic memories is motivated by their very simple structure and ability for scaling to small dimensions. Such devices can also be stacked in multiple levels, providing 3-D architectures. Despite this impressive progress, there is no agreement on how resistive thin film memories operate. Explanations generally fall into two distinct categories: (i) the injection and storage of charge in the thin film; and (ii) metallic filament formation. Ongoing work in Professor Petty’s Group in the School of Engineering and Computing Sciences includes electron microscopy studies to investigate possible filament formation in the organic films. The images below, which show cross sectional SEM images following switching events, strongly suggest that filament formation occurs in the organic layer, in this case an organic compound containing both electron and hole transporting groups. 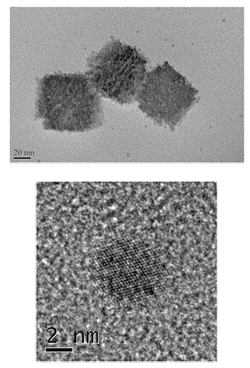 The study of the nascent stages of crystalline growth provides a great insight into the outcome of the final form. Arrested growth within confined phases is made possible using microemulsion droplets as attolitre (10-24 litre) reaction vessels, where only a few molecules are available within the confined solution to form a new crystalline phase. TEM provides an exclusive method for observation and characterisation of these materials combining EDX for elemental analysis and confirmation of sample content, and FFT of HREM images to provide an electron diffraction pattern across small areas of sample, which compared to data available on the macroscopic phases allow for polymorph identification. It is particularly significant to be able to study the early stages of crystal growth as the final form observed on the macro scale may not necessarily be the same order of stability on the nano scale. This has been invaluable in probing crystallisation of systems such as mefenamic acid, when demonstrating the absence of Ostwald’s rule of stages and directly growing a stable form from a solvent that promotes only the metastable form. We have also observed the products of crystallising other systems using the same patented methodology, at their earliest stages of growth. Examples include: Silica, Graphite, Dipicolinic acid, Titania, and a range of other pharmaceutical model compounds. 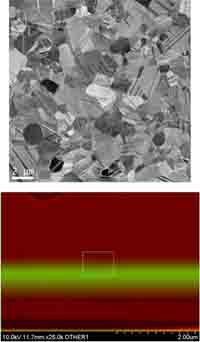 Thin-film photovoltaics (PV), which utilise strongly light absorbing materials (e.g. CdTe, CIGS), are viable alternatives to silicon-based PV. There are however a number of factors that determine device efficiency, such as the quality of the p-n junction, presence of grain boundaries and secondary phases, chemical inter-diffusion between different layers etc. Electron microscopy is an important characterisation tool for PV, due to its high spatial resolution as well as the ability to acquire a number of different signals (e.g. structure, chemistry, optoelectronic properties) from the same region of interest.

We are using EBIC imaging to assess the role of device fabrication on the quality of the p-n junction, cathodoluminescence to measure electrical properties such as the recombination velocity of grain boundaries and minority carrier diffusion length, high spatial resolution EELS/EDX analysis to analyse inter-diffusion between chemically distinct layers (e.g. sulphur inter-diffusion in CdTe), EBSD to determine misorientation between secondary phases and the surrounding matrix, as well as a range of other general characterisation techniques. 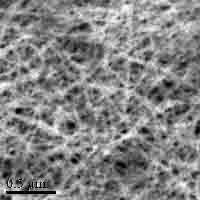 Solar cells based on carbon-rich, organic polymers and small molecules (i.e. fullerenes) are under intense investigation due to their ability to be rapidly solution deposited on flexible substrates. The polymer and fullerene molecules are finely mixed on a nanometre scale in a so-called ‘bulk heterojunction’ configuration. The morphology (e.g. domain size, connectivity of phases, crystallinity) of the bulk heterojunction is crucial for the efficient performance of the solar cell. Although TEM has the resolution for imaging the bulk heterojunction morphology it suffers from poor contrast, due to both the polymer and fullerene being carbon-rich. Contrast can however be improved by plasmon-loss imaging. This works by energy filtering the transmitted electrons, so that only those electrons that have excited a plasmon within the specimen are used to form the image. By analysing the shape and energy of the plasmon peak we are able to identify the phase (polymer/fullerene) and local packing density of fullerene molecules at high spatial resolution. Furthermore electron tomography can be used to reconstruct the distribution of phases within the 3D volume. We are also applying these methods with in-situ annealing in the TEM, to explore how the morphology evolves with thermal processing. 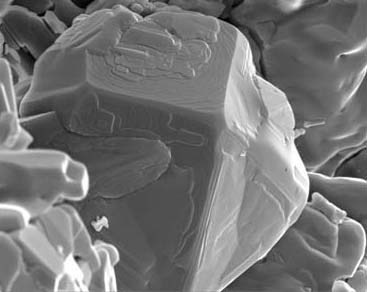 The presence of respirable crystalline silica as cristobalite in volcanic ash poses a potential respiratory health hazard. To date, however, volcanic cristobalite appears to be less hazardous than crystalline silica in some industrial dusts. This research aims to physicochemically characterize volcanic cristobalite in order to understand its apparently reduced pathogenicity. Textural investigations by BSE SEM provide insight into the mechanism of crystal formation in volcanic environments. Subsequent EDS mapping and CL imaging help constrain chemical impurities and structural defects, both of which may account for the diminished toxicity. BSE SEM imaging of sectioned ash particles further provides insight into the presentation of cristobalite, with other volcanic phases clearly masking the cristobalite surface. TEM imaging of ash allows for the identification and physicochemical characterization of nano-silicas, a significant respiratory concern. Preparation of electron-transparent slices from single cristobalite ash particles using FIB microscopy, in combination with SEM, allowed structural and chemical analysis by TEM. This provided evidence of a uniform crystal along a core-to-rim transect, with no changes in crystallinity or composition (Horwell et al., 2012). As such, nano-scale surface occlusion is not thought to be responsible for the reduced toxicology observed.