Welcome to the School of Education News Feed

Grammar schools are no better than other state schools, shows new research

Grammar schools are no better or worse than non-selective state schools in terms of attainment, but can be damaging to social mobility, according to new research by Durham University which analysed over half a million pupil records.

The researchers say a policy of increasing selection within the schools system is dangerous for equality in society. Instead, they are calling on the Government to phase out grammar schools as their analysis shows that grouping more able and privileged children in grammar schools can harm the majority of others who don’t attend those schools.

The research is published in the British Journal of Sociology of Education today (27 March).

The study also showed that pupils attending grammar schools, on average, are far less likely to have special educational needs and are less likely to have English as an additional language. They are also much more likely to be older in their year group (the 11+ test is not properly adjusting for age), to live in more affluent areas and they are more likely to be of Chinese or Pakistani origin (see figures below). Once these differences are accounted for, grammar school pupils attain about the same as equivalent pupils in the rest of the country.

Pupils at state comprehensive schools achieve very similar GCSE results overall regardless of whether they live in an area with grammar schools or not, according to the research (around 330 KS4 mean points for both selective areas and England overall for all pupils, and around 260 points for FSM pupils in both selective and non-selective areas). This shows that the mere existence of grammar schools in an area does not seem to drive up standards or reduce the gap between FSM-eligible pupils and the rest. 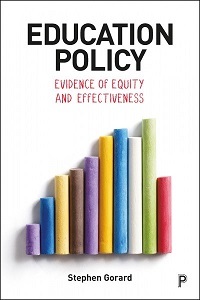 What has been done to achieve fairer and more efficient education systems, and what more can be done in the future? Stephen Gorard provides a comprehensive examination of crucial policy areas for education, such as differential outcomes, the poverty gradient, and the allocation of resources to education, to identify likely causes of educational disadvantage among students and lifelong learners. This analysis is supported by 20 years of extensive research, based in the home countries of the UK and on work in all EU28 countries, USA, Pakistan and Japan. This approachable, rich text brings invaluable insights into the underlying problems within education policy, and proposes practical solutions for a brighter future.